The Coalition has quietly begun work on a new national identity system, less than a year after it scrapped Labour’s derided ID cards. A prototype of the new system... 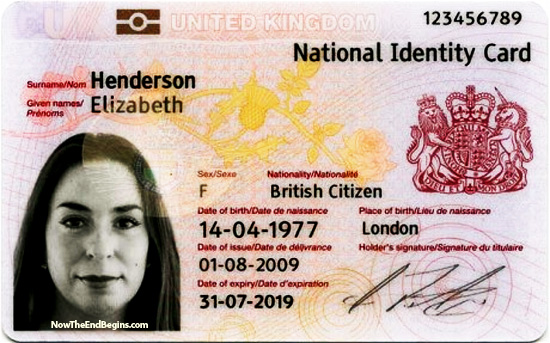 The Mark of the Beast technology update

The Coalition has quietly begun work on a new national identity system, less than a year after it scrapped Labour’s derided ID cards. A prototype of the new system is due to be in place as soon as October this year. It will aim to reliably identify users of government websites, as part of plans to deliver more public services via the web. George Osborne believes the shift online will cut Whitehall administration costs and so help soften the blow of spending cuts over the next few years.

The idea that refuses to die - National, chipped ID cards.

Several private companies that already hold personal data, including credit card providers, will be involved in the system. Such firms have already verified their customers’ identities, so privacy campaigners hope government will not itself collect personal data, in contrast to the National Identity Register that was to be the basis of ID cards. Visa is known to be involved in the plans and is conducting trials that would allow its customers to log in to government websites using credit card details.

Currently customers have to enter multiple login details and passwords to access different public services, sometimes on the same website,” said Francis Maude, the Cabinet Office minister responsible for the cross-government plan.  “This involves significant duplication, is expensive to operate and is highly inconvenient for users.” He also claimed the new scheme, dubbed “identity assurance”, would also make it more difficult for fraudsters to dupe the benefits and tax systems.The government has informed privacy campaigners such as the pressure group NO2ID about the plans, in an attempt to avoid the civil liberties outcry that ultimately destroyed ID cards. But Guy Herbert, NO2ID’s general secretary warned that “the devil will be in the details and especially the legal details” of the new scheme. He said the Cabinet Office had not yet offered details despite its tight schedule. “It’s not a bad thing in itself to check that the person you are talking to is the person you want to talk to,” Mr Herbert said.

“But whatever the good intentions at the outset, the fear will always be that the bureaucratic imperative to collect and share more data about the public will take over.” Identity assurance will be implemented from August next year as part of major government initiatives such as forthcoming radical reforms to the benefits system and improvements to online tax assessments. It will then gradually be extended so users will be able to use the same login for all public services online.” source – Telegraph UK