A powerful earthquake has hit waters of western Indonesia, prompting local officials to issue a tsunami warning. The U.S. Geological survey said the quake had a preliminary magnitude of... 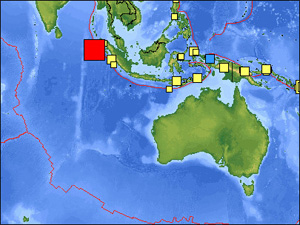 The U.S. Geological survey said the quake had a preliminary magnitude of 7.3 and struck 260 miles (420 kilometers) off the coast of Aceh province.

It was centered 18 miles (30 kilometers) beneath the ocean floor. Arief Akhir, an official with Indonesia’s geological agency, said a tsunami warning has been issued.

Indonesia is prone to seismic upheaval due to its location on the Pacific “Ring of Fire,” an arc of volcanos and fault lines encircling the Pacific Basin.