"Nearly 70 years after the end of World War II, the question of reparations has lost legitimacy," a German finance ministry spokesman declared recently.”... 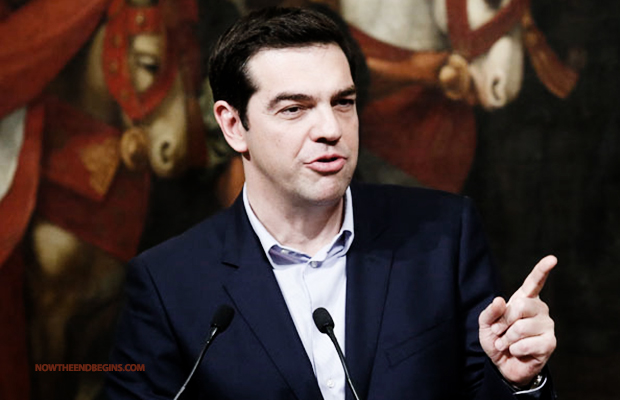 “Tsipras claims Germany owes Greece around €162 billion ($183 billion) - about half the country's debt load, which is estimated at over €315 billion.”
by Geri Ungurean February 23, 2015
NOW THE END BEGINS SHARE:

Berlin has vehemently refused to consider the payment of any reparations.

I find it interesting that the new PM of Greece, Alexis Tsipras, and Vladamir Putin of Russia have become best friends. When powerful people align themselves with one another, you can be sure there is a geo-political reason. The old “You scratch my back and I’ll scratch yours” becomes the game of choice.

Putin has been spewing lies about Ukraine, and stating that the country is filled with Neo-Nazis in powerful political positions. This is propaganda. Pure lies.

Now, suddenly Tsipras is demanding reparations from the occupation of Greece by Germany 70 years ago during WWII. It’s not a coincidence that the two narratives are so similar. Watch these two evil leaders, as they scheme and manipulate the world to achieve their goals.

“Tsipras claims Germany owes Greece around €162 billion ($183 billion) – about half the country’s debt load, which is estimated at over €315 billion.”

The figure is said to cover €108 billion for infrastructure damage wrought by the occupying Nazi forces between 1941 and the end of the war, and €54 billion as compensation for the unpaid loan.

Berlin has vehemently refused to consider the payment of any reparations. “Nearly 70 years after the end of World War II, the question of reparations has lost legitimacy,” a German finance ministry spokesman declared recently.”

German Vice Chancellor and Economy Minister Sigmar Gabriel also denies any opportunity of making payments to Greece, as the treaty signed in 1990 did not outline any additional payments in the future.

“The probability is zero,” he said.

However, Greece does not agree and says the payments must be discussed with united Germany – not with the nation as it was in 1990.” [1] – source

Is it just me, or is anyone else seeing the result of a pow-wow between Putin and Tsipras? The world should keep an eye on these two communist leaders. Nothing they do will be for the good of anyone except for Russian and Greece.

Watch Putin use the “neo-nazi” narrative, which by the way, western journalists are swallowing without a bit of vetting, to launch a ground offensive against all of Ukraine. They will take back Ukraine which was once a part of the USSR.

Watch Tsipras as he turns leftist journalists against Germany, and squeeze every penny he can from Merkel. Russia will certainly ante up the rest of Greece’s debt.

Who knows? We may have a new empire forming, and you can bet that Greece will be a part of it. All these things the Lord allows, so that His prophetic Word will be fulfilled.