Kataluna Enriquez bested the biological females in the competition, putting him in the position to compete for the state’s competition, Miss Nevada USA, with hopes of competing in the bigger contests, Miss USA and Miss Universe. “Miss Silver State was a great experience,” Enriquez told local outlet FOX 5, describing it as a “celebration of womanhood and diversity and this celebration of being your true self.” Glamour magazine recently included a biological male in this year’s Women of the Year awards, identifying transgender model and activist Munroe Berdorf as a “gamechanging influencer.”

Kataluna Enriquez, a biological male who identifies as a woman, has been crowned Miss Silver State USA, which is described as the “biggest preliminary competition for the Miss Nevada USA pageant.”

There irony of transgenderism, a sociopolitical ideology that demands that you ‘accept them as they are’, is that transgenders don’t accept themselves ‘as they are’. Such is the case of Kataluna Enriquez, a person born as a biological male who insists that he is actually a woman. If that is not the definition of mental illness, I don’t know what is. Oh wait, maybe it’s this. Maybe the true definition of mental illness is when you agree with people like Kataluna that a person born as a man can magically become a woman, Yep, that’s it. You’re the problem.

“This know also, that in the last days perilous times shall come.” 2 Timothy 3:1 (KJB)

There is a war raging right now for the hearts and minds of Christians here in America and around the world, a war from Satan himself, attempting to beat you into submission and silence to all the wickedness you see before you right now. I am not saying I think you agree with this nonsense, no bible believer ever could, but I am urging you to speak the truth in love, and press back against this insanity. We will give an account at the Judgment Seat of Christ, now is the time to be bold in your faith and stand for the truth. “Only one life, t’will soon be past, only what’s done for Christ will last”. 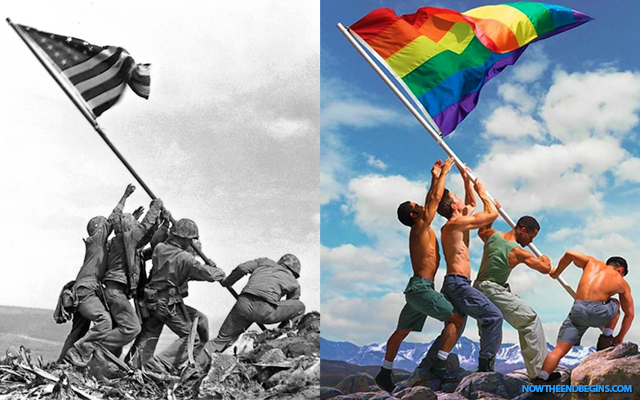 THE BATTLE IS RAGING, WHOSE SIDE ARE YOU ON?

FROM BREITBART NEWS: Kataluna Enriquez bested the biological females in the competition, putting him in the position to compete for the state’s competition, Miss Nevada USA, with hopes of competing in the bigger contests, Miss USA and Miss Universe.

“Miss Silver State was a great experience,” Enriquez told local outlet FOX 5, describing it as a “celebration of womanhood and diversity and this celebration of being your true self.”

Enriquez detailed his experiences competing in other pageants outside of the state, one of which asked for documents from a doctor. The competitor described the request as “invasive.”

Glamour magazine has chosen its women of the year!

Can you guess what comes next…? pic.twitter.com/qeJXQe5CBK

“It brought me back to time where I felt like I was not welcome,” Enriquez said as the outlet noted that he was not assigned a roommate by the competition, which Enriquez declined to name out of fear of retribution:

Enriquez said she understands change doesn’t come easily and some beauty pageants may not be ready for transgender title holders. FOX5 looked at the rules of the pageant Enriquez said discriminated against her and nowhere do they say competitors must be born biologically female.

“I have a great feeling about Nevada … I am looking forward to it,” Enriquez added.

The news comes as Democrats continue to pursue the Equality Act, which effectively changes the legal recognition of sex in favor of gender identity, opening the doors for biological males to compete in women’s competitions and operate in traditionally single-sex spaces, such as locker rooms and homeless shelters.