Americans are paying more attention to the dirty deeds at Planned Parenthood than ever before now that the abortion business has been caught twice selling the body parts of... 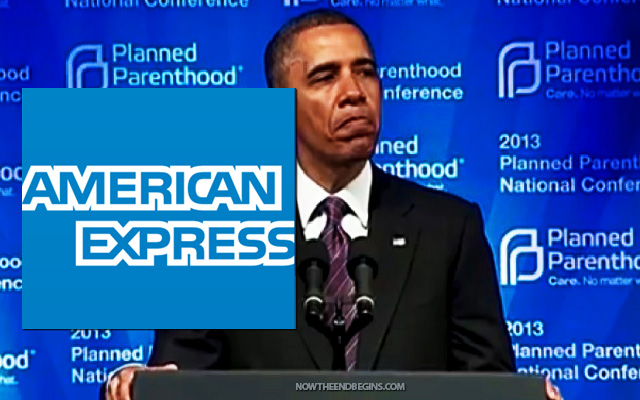 American Express and American Cancer Society: We No Longer Donate to Planned Parenthood

“And they built the high places of Baal, which are in the valley of the son of Hinnom, to cause their sons and their daughters to pass through the fire unto Molech; which I commanded them not, neither came it into my mind, that they should do this abomination, to cause Judah to sin.” Jeremiah 32:35 (KJV)

Americans are paying more attention to the dirty deeds at Planned Parenthood than ever before now that the abortion business has been caught twice selling the body parts of aborted babies. Included in that additional attention is a concern about corporate contributions by large companies and organizations to the abortion giant.

Now, another company and a large nonprofit group are joining the list — saying they last donated to Planned Parenthood many years ago and no longer do so: American Express and the American Cancer Society.

Officials with both companies contacted the Daily Signal and told the publication about the cessation of donations to Planned Parenthood:

This latest development comes in the wake of two undercover videos that showed Planned Parenthood executives talking about the sale of fetal body parts. Planned Parenthood is facing both federal and state investigations—and the possibility of losing taxpayer funding.

Obama Breaks Promise To Not Use Obamacare For Taxpayer-Funded Abortions

Here’s what the other companies had to say:

* A representative from Coca-Cola confirmed for The Daily Signal the company does not contribute to Planned Parenthood, nor does it match employee contributions to the organization.

* “We are making sure that Ford Motor Company is not listed as a Planned Parenthood contributor on their website,” a representative from Ford told The Daily Signal. “In addition, we do not offer an employee match for charitable contributions,” the Ford representative said. It has been at least 10 years since Ford stopped matching employee gift contributions, the representative added.

* Similarly, Xerox was listed on the Planned Parenthood website and has said it also does not donate in any way. “We checked our files for the last 20 years and have no record of Xerox Corp. contributing to Planned Parenthood,” a representative from Xerox told The Daily Signal.