Bill O'Reilly does a decent job of keeping the pressure on, but in the end allows Obama to control the flow of the conversation. The good part of that,... 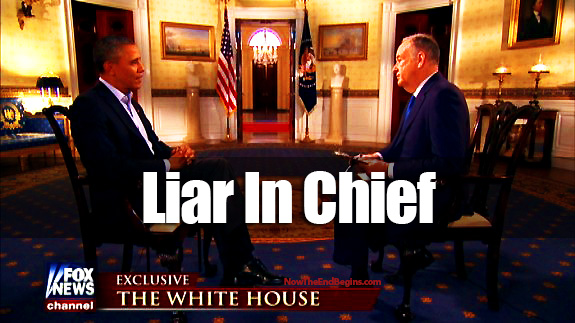 “If a ruler hearken to lies, all his servants are wicked” Proverbs 29:12

WARNING: What you are about to see is a graphic example of what pathological lying looks and sounds like. It gets so bad that near the end of the interview, Obama denies that he ever said that we need to “fundamentally transform America“, as he did in his 2008 campaign for the presidency.

Bill O’Reilly does a decent job of keeping the pressure on, but in the end allows Obama to control the flow of the conversation. The good part of that, however, is that you get to see Obama lying over and over and over again. But after seeing this it becomes quite obvious that Obama is an honors graduate from the Clinton school of story telling.