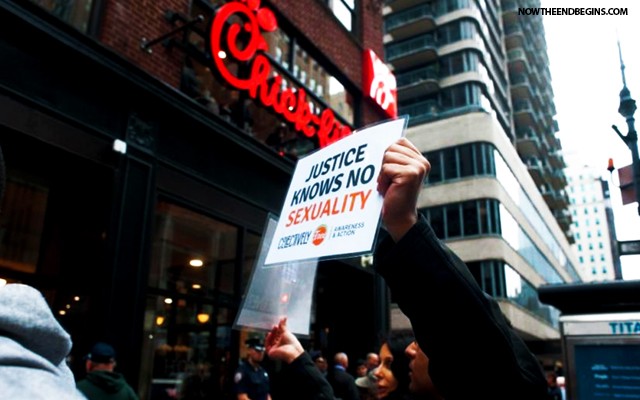 Hours after the doors opened, a 20-minute-long line still stretched down W. 37th St. from the front doors on Sixth Ave.
by Geoffrey Grider October 5, 2015
NOW THE END BEGINS SHARE:

EDITOR’S NOTE: So let me see, 5,000 CFA fans show up for the best chicken sandwich in the world and wait for hours in the rain to buy lunch, while 2 dozen LGBT stand outside and protest. Hmm, I’ll take those odds any day. In fact, if I was there, I would have been happy to buy all of those 24 people a chicken sandwich. Chick-Fil-A takes Manhattan!

Chick-Fil-A, the massively popular Southern staple owned by a conservative Christian family known for their anti-gay marriage views, hatched a 5,000-square-foot store in Herald Square to mixed reviews from fervent devotees and activists.

“This is the best chicken in the world, in my opinion.” said Dana Kelly, 25, after devouring an original chicken sandwich with waffle fries. “It was completely worth it. It’s like nothing else.” Thousands of hungry, and soggy, fast food fanatics braved the bad weather to get a taste of the chain’s signature sandwiches. A few hundred even camped out overnight.

Hours after the doors opened, a 20-minute-long line still stretched down W. 37th St. from the front doors on Sixth Ave.

But not everyone outside the new sandwich shop Saturday was there for a taste of chicken.

“I was very shocked by the amount of people lining up to support this company,” said Lila Trenkova, a founder of Collectively Free, an animal and gay rights activist group. “I think that it’s ignorance rather than people actually not caring.”

Trenkova and about two dozen others staged a demonstration outside the three-story behemoth to protest Chick-Fil-A’s history as a conservative-owned chicken palace.

The fast food chain found itself at the center of the politically-charged debate over gay marriage in 2012 when then-Chief Operating Officer and current CEO Dan Cathy, the son of the company’s deeply religious founder, told a Christian news organization that Chick-fil-A supported “the biblical definition of the family unit.” 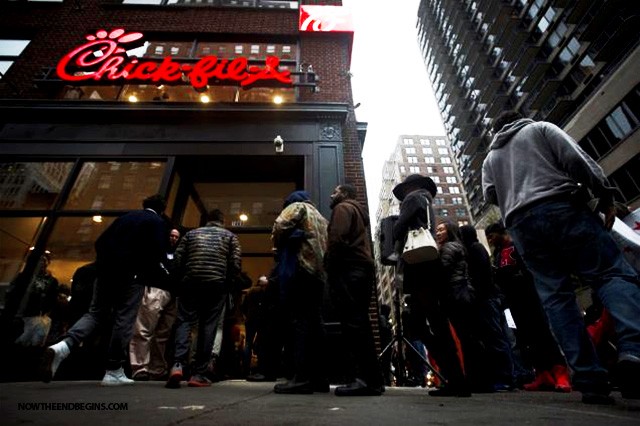 Customers stand in line while awaiting for the grand opening of the Chick-fil-A franchise in Midtown.

Cathy later said that marriage equality was “inviting God’s judgment” on the U.S. The Atlanta-based company has been family owned and privately held since 1964. Despite the backlash against the conservative Christian views of its owners, the company has pecked its way into the roster of successful nationwide chains.

Customers at the new outpost in usually liberal New York seemed more concerned with the wait than the company’s politics.

“It’s like a little piece of home,” said Chris Pickering, 25, originally from Miami but living in Brooklyn. “The chicken is better than at any other fast food places and it was incredibly fast, even faster than McDonalds.” source