An anti-Israel demonstration at the French capital’s Bastille Square turned violent after protesters attacked a synagogue, trapping scores of people inside as police fought to protect them.... 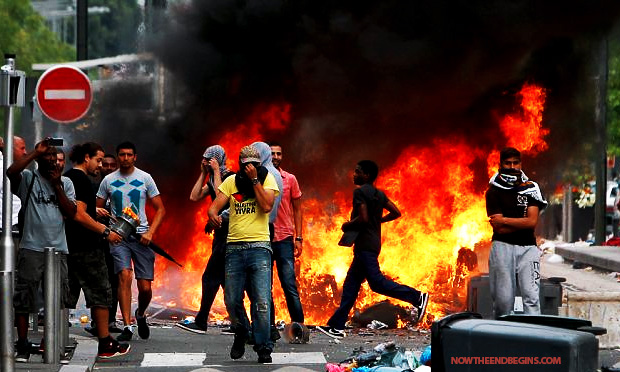 Travelling by tram through Paris, a boy heads back from school with his sister when a group of teenagers spots that he is wearing a Star of David pendant. They surround the pair and start shouting: ‘Dirty Jews — you have too much money, too much power, you should get out of France.’

Terrified and shaken, by the time Eden, 16, and his sister Elie, 12, get back home they are still in tears. For Doctor David Tibi, their father, the incident was the final straw. And so it is that in the next few days, he and his family will pack their bags, leave France for good and move to Israel.

Europe has become like the dark days of 1938 Nazi Germany

‘I have spent all my life in France and it is has been a wonderful life,’ said Dr Tibi, a 44-year-old dentist whose wife, Melanie, is a medical doctor, and with whom he has five children in all. ‘We have done well professionally and have the kids at good  schools, but the truth is we have had enough.

‘This is about survival. When your kids have to go to schools with armed guards at the gates and when they are abused in public, the situation is out of control.’

Events have taken a turn for the worse after violent clashes between pro-Palestinian Arabs and Jews in Paris. Tensions have been inflamed by the military action in the Middle East, where the Israeli shelling of Gaza — in response to the abduction and murder of three Israeli teenagers — is being answered with rockets fired by the Arab group Hamas.

An anti-Israel demonstration at the French capital’s Bastille Square turned violent after protesters attacked a synagogue, trapping scores of people inside as police fought to protect them.

In response, 150 Jewish men were seen marching through Paris armed with iron bars seeking to confront pro-Palestinian groups. Then, a mob of Muslim youths reportedly shouting ‘Death to Jews’ and ‘Slit Jews’ throats’ ransacked and burned down a chemist owned by a Jewish family, as well as a kosher supermarket.

In Germany, meanwhile, Israeli ambassador Yakov Hadas-Handelsman has protested after one of his countrymen was abused by anti-Semitic thugs. He said: ‘They pursue the Jews in the streets of Berlin as if we were in 1938.’

In Essen, 14 people were arrested on suspicion of planning an attack on the historic Old Synagogue — the largest surviving example of pre-war Jewish culture in Germany — and the imam of a Berlin mosque allegedly called on Muslims to murder ‘Zionist Jews’.

Such has been the concern about anti-Semitism in France that last year the number of French Jews relocating to Israel exceeded those from America, despite the fact that America’s Jewish population is ten times larger than France’s. source – Daily Mail UK