A blood rave scheduled to take place on Halloween in Amsterdam is planning to shower clubbers with sprinklers filled with gallons of blood. ... 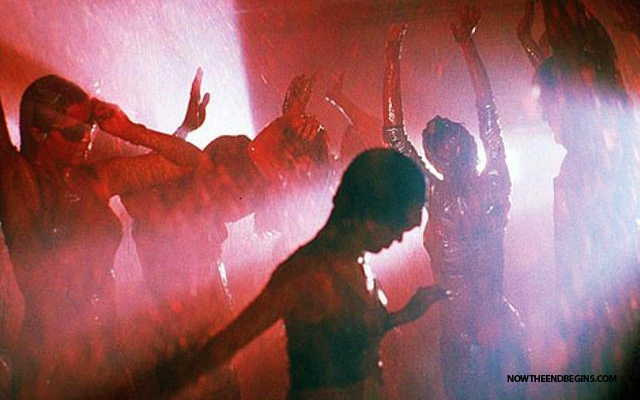 “Therefore rejoice, ye heavens, and ye that dwell in them. Woe to the inhabiters of the earth and of the sea! for the devil is come down unto you, having great wrath, because he knoweth that he hath but a short time.” Revelation 12:12 (KJV)

EDITOR’S NOTE: The tide of darkness has been steadily on the rise since 2008, in America and around the globe. As the Antichrist gets ready to make his appearance on the world stage, an unsaved world is preparing to receive him. These are the days of prophecy in the last moments before the Rapture of the Church which will usher in the time of Jacob’s Trouble. The Devil knows that he will have but a “short time”, and he plans on making every minute count.

A rave scheduled to take place on Halloween in Amsterdam is planning to shower clubbers with sprinklers filled with gallons of blood. The secretive event, posted on Facebook, does not specify whether the blood will be real or synthetic, but is said to be inspired by the graphic opening scene from the horror film Blade.

Satanism is on the rise both in America and around the world. Click to see more info.

Unsurprisingly the organisers of the graphic event are remaining anonymous, and have even listed the place of the event as ‘a discrete location in Amsterdam.’  According to the event page, Blood Rave is a nightlife community for like-minded individuals, with the rave description ending with the question, ‘thirsty?‘

The event has attracted a great deal of attention. with over 4,100 currently attending, according to the page. But some have misgivings about what kind of blood will be used for the deluge. One user posted on the event: ‘What kind of blood will you use? Pig or cow? Because pig might be a problem for several kinds of people (religious/cultural reasons).’

According to the NL Times, which claims to have spoken to the event organisers, what will be showered on clubbers is still being decided.

‘After a long search we have developed a special sprinkler system with pipes running across the ceiling and thus making us able to spray blood over the crowd,’ the newspaper was told.

‘We’ve already tested it a number of times with a substance resembling blood. It is pushing the borders, but we want to see how far we can go.’ Some have voiced their misgivings about the controversial theme. One said: ‘I don’t want to be ‘that guy’ but this has disaster written all over it.’

The event has links to an opening scene from the 1998 vampire film Blade, where blood pours from the ceiling in a club.  Tickets are currently listed at €24.50 (£17.93). source

“…For this purpose the Son of God was manifested, that he might destroy the works of the devil.” 1 John 3:8 (KJV)