The World Begins To Embrace The Implantable RFID Microchip

A man I will call “Andrew,” has paid Grafstra $30 to have a radio-frequency identification (RFID) chip injected into the space between his thumb and pointer finger, and... 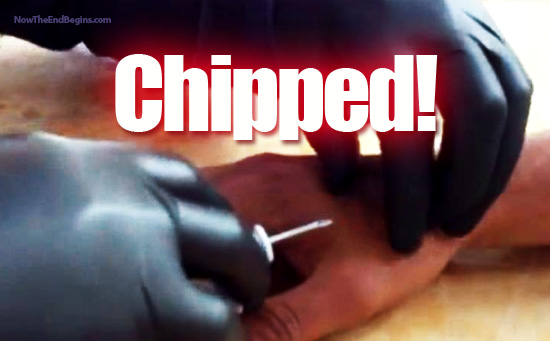 Amal Graafstra snaps on a pair of black rubber gloves. “Do you want to talk about pain management techniques?” he asks. The bearded systems administrator across the table, who requested I call him “Andrew,” has paid Grafstra $30 to have a radio-frequency identification (RFID) chip injected into the space between his thumb and pointer finger, and as Graafstra describes Lamaze-type breathing methods, Andrew looks remarkably untroubled, in spite of the intimidatingly high-gauge syringe sitting on the table between them.

Graafstra finishes his pain talk, fishes a tiny cylindrical two-millimeter diameter EM4012 RFID chip out of a tin of isopropyl alcohol, and drops it into the syringe’s end, replacing the RFID tag intended for pets that came with the injection kit. He swabs Andrew’s hand with iodine, carefully pinches and pulls up a fold of skin on the top of his hand to create a tent of flesh, and with the other hand slides the syringe into the subcutaneous layer known as the fascia, just below the surface.

Then he plunges the plastic handle and withdraws the needle. A small crowd of onlookers applauds. The first subject of the day has been successfully chipped.

Here’s a video of the RFID Microchip Implant procedure:

Over the course of the weekend, Andrew would be one of eight people to undergo the RFID implantation among the 500 or so attendees of Toorcamp, a hacker conference and retreat near the northwest corner of Washington State. Graafstra’s “implantation station” was set up in the open air: Any camper willing to spend $30 and sign a liability waiver could have the implantation performed, and after the excitement of Andrew’s injection, a small line formed to be next.

And why volunteer to be injected with a chip that responds to radio signals with a unique identifier, a procedure typically reserved for tracking pets and livestock? “I thought it would be cool,” says Andrew, when we speak at a picnic table a few minutes after his injection. (The pain, he tells me, was only a short pinch, followed by a “weird feeling of a foreign body sliding into my hand.”)

The practical appeal of an RFID implant, in theory, is quick authentication that’s faster, cheaper and more reliable than other biometrics like thumbprints or facial scans. When the chip is hit with a radio frequency signal, it emits a unique identifier number that functions like a long, unguessable password. Implantees like Andrew imagine the ability to unclutter their pockets of keys and keycards and instead access their cars, computers, and homes with with a mere wave of the hand.

Andrew says he initially hoped to use his RFID implant instead of the HID identity card his office uses for entry, but wasn’t deterred from the injection when Graafstra told him that HID uses a proprietary system whose chips Graafstra couldn’t implant. “I don’t have anything specific in mind, now, but I didn’t know when I’d have another opportunity to do it,” says Andrew. “And it’s a good excuse to start learning more about RFID.”

For Graafstra himself, the chips are more than a novelty or a hacker hobby. Graafstra uses them to access his home near Seattle, to turn on his motorcycle, to open a safe in his house, even to authenticate into his phone, a Samsung Galaxy Nexus that’s capable of near-field communications. He had his first chip installed in 2005 by a doctor client of his IT services firm, and has since become one of a few vocal RFID body implant evangelists, chronicling his experiences with the chip on his website and in a book, RFID Toys.

The enthusiasm of hackers like those at Toorcamp for RFID implants may seem a bit surprising–privacy advocates have long warned that the chips could allow individuals to be tracked by governments and corporations, even when they’re merely housed in passports or clothing, not to mention injected subcutaneously. But Graafstra says that the chips he’s implanting are difficult to read from more than a few inches away. And he argues the idea of some trying to read his chip in order to spoof its signal and access his house or other property is far less of a threat than other potential privacy invasions.

“If someone manages to read this, it’s just as if they found a piece of paper with a number on the ground,” he says. “For any kind of attack, they would have to also know me and where I live and wants to gain access to the things I’ve enabled. There are easier ways to do that, like breaking into my window.”

That hasn’t stopped privacy advocates and religious types from attacking Graafstra as a harbinger of evil–Some link his hand chip with the Bible’s “mark of the beast,” a number stamped by the Devil on hands and heads in the Book of Revelations. Graafstra ignores their emails or responds politely. “Some people view the body as a sacred temple,” he says. “Some view it as a sports utility vehicle they can upgrade. I’m definitely in the second category.”

Even so, he says his Toorcamp implantation station was a one-off. Outside of the camp’s community of hacking and experimentation, he worries that the risk of unhappy customers would be too high. “I trust that the people here have put a little thought into it and know what they’re getting into,” he says. “For everyone else, I recommend you contact your local piercing artist.” source – Forbes