President Obama’s Egypt policy is about as effective as his Syria policy. And for the first time Wednesday, with the number of dead and injured mounting, one could almost... 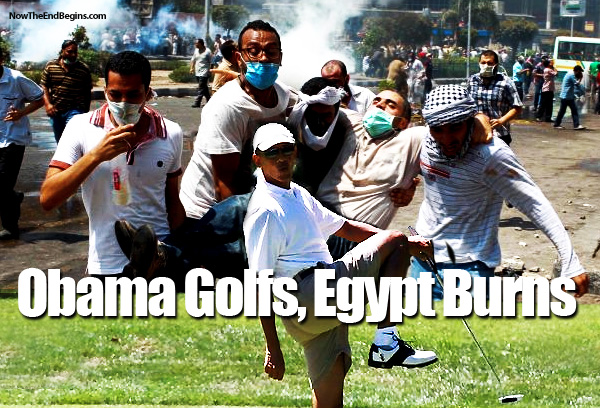 Put it this way: President Obama’s Egypt policy is about as effective as his Syria policy. And for the first time Wednesday, with the number of dead and injured mounting, one could almost envision Egypt’s descent into out-and-out civil war.

Obama was briefed, said nothing and went back to golf. Secretary of State John Kerry took a break from his fruitless obsession with the nonexistent “peace process” to condemn the violence, but took no questions and had no policy announcement. This, in a nutshell, is the White House’s approach to the Middle East — the absence of any policy and a lot of empty words.

Sam Tadros, a Egyptian expert at the Hudson Institute who is also affiliated with the Hoover Institution, is not optimistic. Late Wednesday he remarked to me on the military’s assault on its opponents: “In a sense this was inevitable. You don’t ask the people to give you a mandate and then sit by idly. The timing was only delayed because of Ramadan and the Eid celebrations.” Unlike the administration, he is looking ahead — and doesn’t like what he discerns. “The question no one seems to be asking is where the MB [Muslim Brotherhood] is supposed to go after they end the protests,” he said. “They certainly won’t be going home. Instead of one protest you will have smaller ones throughout the country.” The victims will include non-Muslims as is so often the case in the Arab world. He told me, “Christians will of course take most of the damage. Already there are reports of many churches attacked. This will continue.”

The question now is what can be done and what role the United States should play. Tadros is blunt: “As to outside powers, I am afraid it is too late now. This is a zero-sum game and one side has to win.”

If the Egyptian military is, as most contend, far more effective than Bashar al-Assad’s troops and makes quick work of former government officials and their supporters, the Muslim Brotherhood problem hardly goes away. Not without justification they will likely conclude democracy is a dead end and will resort to other means to assert their vision for Egypt. The military will have succeeded only in driving MB members to return to violence and terrorism instead of ballots and government ministries.

In a sense, then, Obama might as well play golf. He’s dropped the ball on Egypt and the entire region, leaving the United States with few options and the Egyptian people to a bloody future in the short run and a repressive authoritarian junta in the longer run. This is a policy failure of the highest order.

Isolationists on the right and left argue that the United States has no interest in places like Egypt. But without U.S. leadership, what follows in places such as Egypt and Syria is a humanitarian and geopolitical nightmare that doesn’t stay within one country’s borders. Syria, Iran and Hezbollah must be gleeful to see the United States so weakened and insignificant. source – Wash Post