The Hindu Shiva ‘Dance Of Destruction’ Filmed Inside CERN Collider

So why, one might ask, has a very bizarre movie been filmed on location there featuring the Shiva 'Dance Of Destruction'? Yes, in fact, a statue of Nataraja depicting the Hindu god Shiva was dedicated there on-site back in 2004 when CERN was first constructed. 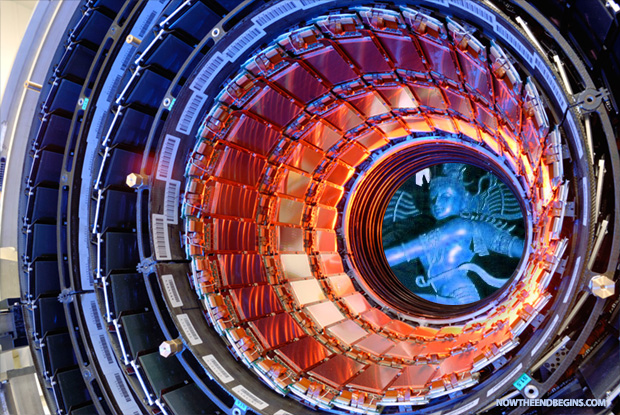 The LHC is the largest machine in the world. It took thousands of scientists, engineers and technicians decades to plan and build, and it continues to operate at the very boundaries of scientific knowledge.

“And the LORD said unto Satan, Whence comest thou? Then Satan answered the LORD, and said, From going to and fro in the earth, and from walking up and down in it.” Job 1:7 (KJV)

The Large Hadron Collider (LHC) is the world’s largest and most powerful particle accelerator. It first started up on 10 September 2008, and remains the latest addition to CERN’s accelerator complex. The LHC consists of a 27-kilometer ring of superconducting magnets with a number of accelerating structures to boost the energy of the particles along the way.

CERN, the European Organization for Nuclear Research, has its headquarters in Geneva. At present, its Member States are Austria, Belgium, Bulgaria, the Czech Republic, Denmark, Finland, France, Germany, Greece, Hungary, Italy, the Netherlands, Norway, Poland, Portugal, the Slovak Republic, Spain, Sweden, Switzerland and the United Kingdom. India, Israel, Japan, the Russian Federation, the United States of America, Turkey, the European Commission and UNESCO have observer status. CERN Council is the body in which the representatives of the 20 Member States of the Organization decide on scientific programmes and financial resources.

So why, one might ask, has a very bizarre movie been filmed on location there featuring the Shiva ‘Dance Of Destruction‘? Yes, in fact, a statue of Nataraja depicting the Hindu god Shiva was dedicated there on-site back in 2004 when CERN was first constructed.

A CERN physicist, hard at work using the LHC to search for the smallest particle in existence , when a ghostly woman played by soprano Claron McFadden appears, asking him if he loves the particle more than he loves himself, and, if he could, would he become one with the particle. source

Now here is where it gets interesting. The significance of the Lord Nataraja sculpture is that the Hindu god Shiva is shown as first destroying the world, then recreating it. A Bengali chant talking about this says:

The bible clearly tells us that the Hindu “dark one” who inhabits the “burning ground” is none other than Satan himself. Is the picture starting to become clear to you now?

The same “science” that inspired the builders of the Tower of Babel, men who like Satan said they did not need God to reach Heaven, is also behind the work of the people at CERN. People who have dedicated the whole of their research to the “dark one”.

There are no accidents and no coincidences. The New World Order is sending a clear-cut message. They are awaiting for the appearance of their lord, the Antichrist, and will attempt to destroy the world and recreate it in his image. The bible tells us how it all will end:

“But tidings out of the east and out of the north shall trouble him: therefore he shall go forth with great fury to destroy, and utterly to make away many. And he shall plant the tabernacles of his palace between the seas in the glorious holy mountain; yet he shall come to his end, and none shall help him.” Daniel 11:44,45 9 (KJV)