Chanting 'death to America', hundreds of protestors marched on the U.S. Embassy compound in Yemen's capital today, where they burned the American flag, used stones to smash windows, and... 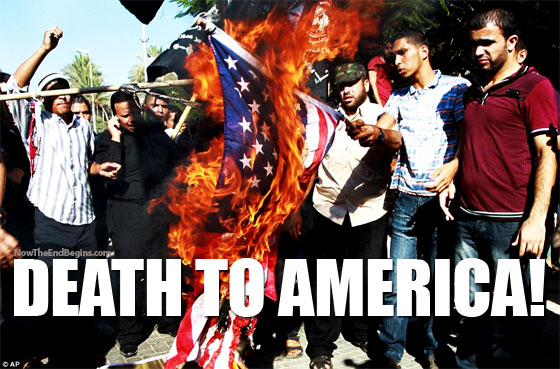 Demonstrations spread: Palestinians burn a U.S. flag during a protest against the movie, Innocence of Muslims, near the United Nations office in Gaza City
by Geoffrey Grider September 14, 2012
NOW THE END BEGINS SHARE:

From Yemen to Egypt and Iraq to Indonesia, rising anger provoked by an anti-Islam film has seen protestors storm U.S. embassies in Muslim countries around the world.

Demonstrations spread: Palestinians burn a U.S. flag during a protest against the movie, Innocence of Muslims, near the United Nations office in Gaza City

Chanting ‘death to America’, hundreds of protestors marched on the U.S. Embassy compound in Yemen’s capital today, where they burned the American flag, used stones to smash windows, and set fire to cars, before breaking through the main gate of the heavily fortified compound in eastern Sana’a.

The attack followed Tuesday night’s storming of the United States Consulate in Benghazi, Libya – where the U.S. ambassador and three other staff were killed.

Security has been ramped up at U.S. embassies and consulates around the world, and at least one cemetery for American veterans, while President Obama called the leaders of Libya and Egypt to continue helping him to ensure the safety of diplomatic personnel. 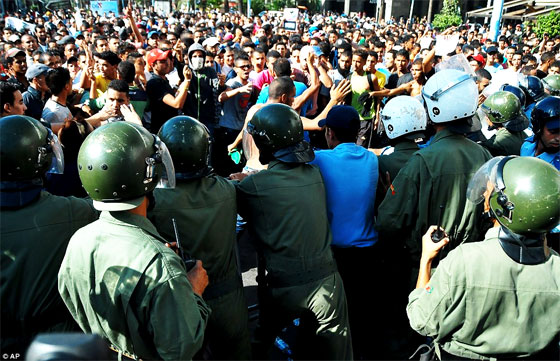 Clashes: Riot police form a line as Moroccan protestors shout during a protest about the film Innocence Of Muslims, which mocks Islam’s Prophet Mohammed

One of those killed in Benghazi alongside U.S. Ambassador Christopher Stevens was 42-year-old Glen Doherty, a family friend told CBS Boston today. There were protests in Tunisia, Sudan and Morocco overnight, and the demonstrations have reached Cairo and Baghdad.

Today riot police in Indonesia were standing guard outside the U.S. Ambassador’s Jakarta residence in anticipation of further action. Once inside the compound in Sana’a, Yemeni protestors brought down the U.S. flag, burned it and replaced it with a black banner bearing Islam’s declaration of faith – ‘There is no God but Allah.’ 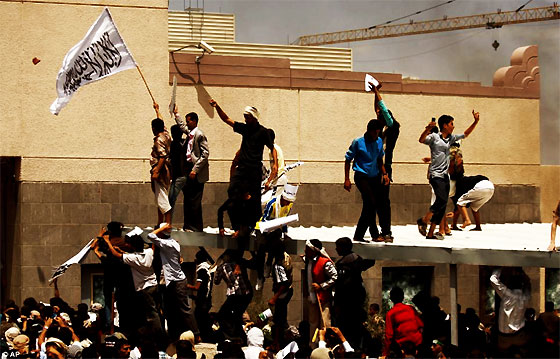 Demonstrations: A Yemeni protestor, left, holds a white flag with Islamic inscription in Arabic that reads, ‘No God but Allah, and Mohammed is his prophet,’ in front of the U.S. embassy

Before storming the grounds, demonstrators removed the embassy’s sign on the outer wall, set tyres ablaze and pelted the compound with rocks.

Yemeni security forces who rushed to the scene fired in the air and used tear gas to disperse the demonstrators and were eventually able to drive them out of the compound. It was not immediately clear whether anyone was inside the embassy at the time of the attack. 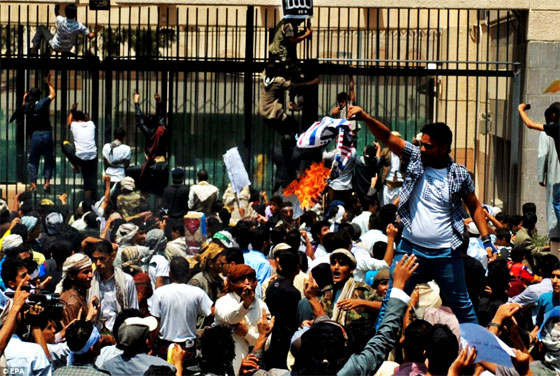 Fury: Chanting ‘death to America,’ hundreds of protesters angered by an anti-Islam film stormed the U.S. Embassy compound in Yemen’s capital and burned the American flag. It was the latest in a series of attacks on American diplomatic missions in the Middle East

Some protestors held aloft banners declaring ‘Allah is Greatest’. Tyres blazed outside the compound and protesters scaled the walls.

‘We can see a fire inside the compound and security forces are firing in the air. The demonstrators are fleeing and then charging back,’ one witness said.

It was similar to an attack on the US Embassy in the Egyptian capital of Cairo on Tuesday night.

Witnesses said there were some injuries on both sides but gave no exact figures.

Yemen, a key U.S. ally, is home of al Qaeda in the Arabian Peninsula (AQAP), which is viewed by Washington as the most dangerous branch of the militant network established by Osama bin Laden.

Yemen is fighting an al Qaeda-backed insurrection largely in the south of the country. Its embassy in Washington did not report any casualties. source – Daily Mail