Street vendors across downtown Charlotte are selling posters and artwork depicting President Obama as Jesus Christ and the Democratic National Convention is expected to feature a stained-glass window backdrop... 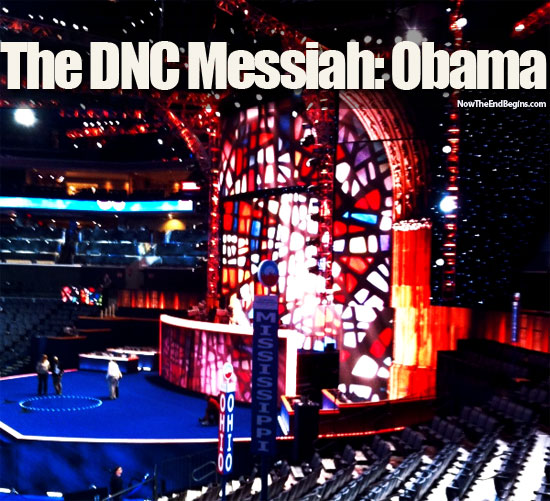 The DNC is building a massive faux stained glass edifice to showcase their "messiah" Barack Hussein Obama when he takes the stage to address his worshippers.
by Geoffrey Grider September 5, 2012
NOW THE END BEGINS SHARE:

“For such are false apostles, deceitful workers, transforming themselves into the apostles of Christ. And no marvel; for Satan himself is transformed into an angel of light. Therefore it is no great thing if his ministers also be transformed as the ministers of righteousness; whose end shall be according to their works.” 2 Corinthians 11:13-15

Street vendors across downtown Charlotte are selling posters and artwork depicting President Obama as Jesus Christ and the Democratic National Convention is expected to feature a stained-glass window backdrop during their meeting.

The DNC is building a massive faux stained glass edifice to showcase their “messiah” Barack Hussein Obama when he takes the stage to address his worshippers.

One poster features an image of the president in prayer with the headline, “Prophecy Fulfilled.”

“Barak is of Hebrew origin and its meaning is ‘flash of lightning,” the poster notes, referencing a passage in in the Old Testament book of Judges.

Hussein, they allege, is a Biblical word meaning “good and handsome.” “So you see, Barak was destined to be a good and handsome man that would rise like a flash of lightning to win victory in a battle against overwhelming odds,” the poster read. 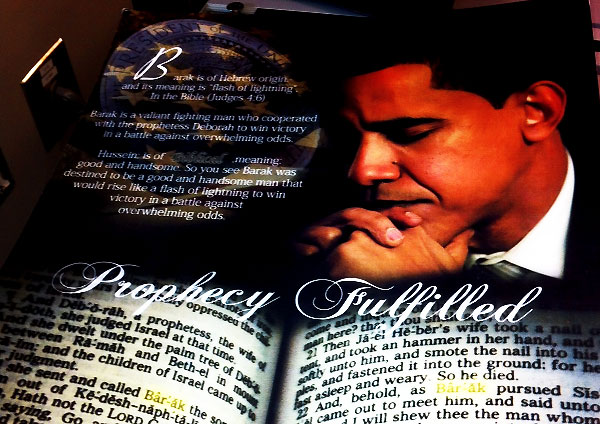 The posters were being sold outside security zones at the Democratic National Convention. The posters are not sanctioned by the DNC.

An Obama calendar, obtained by Fox News, features two religious images of the Commander-in-Chief. The month of August includes a photograph of Obama’s birth certificate with the words “Heaven sent.” The president was born on Aug. 4th.

The entry also includes a photograph of Obama along with a passage of Scripture from the New Testament.

“For God so loved the world, that He gave His only begotten Son, that whosever believeth in him should not perish, but have everlasting life,” the entry read — referencing John 3:16.

The month of November includes an image of individuals with their hands on Obama’s back — with the words “The Lord is my Shepherd, I shall not want.”

Fox News also obtained a photograph of a DNC stage design. It resembled a giant stained glass window. It’s unclear what the imagery will be used for.

The comparisons to Jesus Christ have brought strong condemnation from some evangelicals — including Robert Jeffress, pastor of the First Baptist Church in Dallas, TX.

“If Barack Obama is the promised Messiah, I think there are going to be many Christians who are profoundly disappointed,” Jeffress told Fox News. “One only has to look at Obama’s record to understand that he is absolutely, positively not the promised One.” source – Fox News