The Coming War by the Obama Administration Against Bloggers 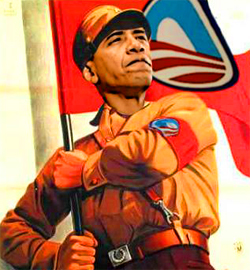 It has to start somewhere

You may not have noticed but over the past few months there have been a number of articles about the US government cracking down on “internet piracy”. Now by “piracy” they immediately are referring to stolen or counterfeit goods like sports memorabilia, designer watches, etc. Then after they floated that trial balloon, we read today in the article quoted below that that will now extended to “downloadable content” that you did not create or purchase yourself such as songs, videos and movies. But let me tell you, and you will not read this anywhere else, who the real target of the Obama administration is – web bloggers and people who repost story content.

Obama knows that in our social-obsessed society that if he cannot control the Internet, and what’s posted on there, then ultimately he cannot control his message. One of the most rapid means of information transfer in the world today is people who write for blogs and post on Facebook and Twitter. The entire Egyptian revolution by the Muslim Brotherhood was waged first on Facebook. So we will predict that the real intent of Obama’s crackdown on piracy is actually a veiled attempt to stop the flow of news and other information. But you have to start somewhere, right? And someday very soon, the act of reposting the story below taken from MSNBC, will be branded a crime by Obama. Obama is creating a “yellow star” shadow government, and it seems that there is little that can be done to stop him, other than to post and repost stories like this one.

“Amid growing calls for more government regulation of the Internet, the United States is conducting what it calls “a sustained law enforcement initiative aimed at counterfeiting and piracy” – an effort that already has resulted in arrests and the seizure of 125 websites. Ask anybody who uses a computer if they’ve ever downloaded or streamed media content for free on the Internet, and the answer most likely will be yes. The U.S. government and the American media industry say as much as a quarter of this kind of media traffic violates U.S. copyright law, and both are getting serious in their attempts to turn off the spigot.

The government and the media industry say U.S. copyright law (specifically, 18 USC 2319), states that distributing such content without permission from the copyright holder is a crime – copyright infringement. They generally use a simpler name: theft – of intellectual property, or “IP theft” for short.

The most recent skirmish in the escalating conflict occurred this week, when the U.S. Immigration and Customs Enforcement agency (ICE) announced that its Homeland Security Investigations unit had seized the domain names of five websites that it said were being used to sell counterfeit goods or illegally distribute copyrighted materials, including media content.

If convicted, the banner warns, even first-time offenders “will face up to five years in federal prison,” plus “restitution, forfeiture and fine.”

The crackdown – dubbed “Operation In Our Sites” – is being spearheaded by ICE’s National Intellectual Property Rights Coordination Center, working in coordination with U.S. attorneys’ offices across the country. The initiative has so far seized the domain names of 125 websites since it began last year, ICE says, effectively shutting them down.” source – MSNBC