The Chilling History of How Hollywood Helped Hitler

In devastating detail, an excerpt from a controversial new book reveals how the big studios, desperate to protect German business, let Nazis censor scripts, remove credits from Jews, get... 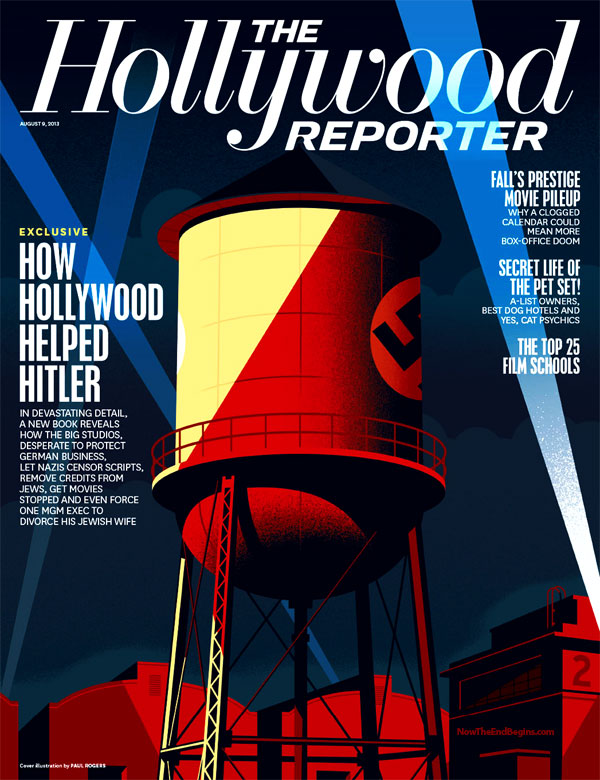 In devastating detail, an excerpt from a controversial new book reveals how the big studios, desperate to protect German business, let Nazis censor scripts, remove credits from Jews, get movies stopped and even force one MGM executive to divorce his Jewish wife.
by Geoffrey Grider July 31, 2013
NOW THE END BEGINS SHARE:

The 1930’s are celebrated as one of Hollywood’s golden ages, but in an exclusive excerpt from his controversial new book, The Collaboration: Hollywood’s Pact with Hitler (Harvard University Press, on sale Sept. 9), Harvard post-doctoral fellow Ben Urwand uncovers a darker side to Hollywood’s past.

In devastating detail, an excerpt from a controversial new book reveals how the big studios, desperate to protect German business, let Nazis censor scripts, remove credits from Jews, get movies stopped and even force one MGM executive to divorce his Jewish wife.

Drawing on a wealth of archival documents in the U.S. and Germany, he reveals the shocking extent to which Hollywood cooperated and collaborated with the Nazis during the decade leading up to World War II to protect its business.

Indeed, “collaboration” (and its German translation, Zusammenarbeit) is a word that appears regularly in the correspondence between studio officials and the Nazis. Although the word is fraught with meaning to modern ears, its everyday use at the time underscored the eagerness of both sides to smooth away their differences to preserve commerce.

The Nazis threatened to exclude American movies — more than 250 played in Germany after Hitler took power in 1933 — unless the studios cooperated. Before World War I, the German market had been the world’s second largest, and even though it had shrunk during the Great Depression, the studios believed it would bounce back and worried that if they left, they would never be able to return.

Beginning with wholesale changes made to Universal’s 1930 release All Quiet on the Western Front, Hollywood regularly ran scripts and finished movies by German officials for approval. When they objected to scenes or dialogue they thought made Germany look bad, criticized the Nazis or dwelled on the mistreatment of Jews, the studios would accommodate them — and make cuts in the American versions as well as those shown elsewhere in the world.

It was not only scenes: Nazi pressure managed to kill whole projects critical of the rise of Adolf Hitler. Indeed, Hollywood would not make an important anti-Nazi film until 1940. Hitler was obsessed with the propaganda power of film, and the Nazis actively promoted American movies like 1937’s Captains Courageous that they thought showcased Aryan values.

Historians have long known about American companies such as IBM and General Motors that did business in Germany into the late 1930s, but the cultural power of movies — their ability to shape what people think — makes Hollywood’s cooperation with the Nazis a particularly important and chilling moment in history. — Andy Lewis

On Friday, Dec. 5, 1930, a crowd of Nazis in Berlin seized on an unusual target: the Hollywood movie All Quiet on the Western Front. Recognized in most countries as a document of the horrors of the First World War, in Germany it was seen as a painful and offensive reenactment of the German defeat.

The Nazis, who had recently increased their representation in the Reichstag from 12 to 107 seats, took advantage of the national indignation toward All Quiet on the Western Front. They purchased about 300 tickets for the first public screening, and as they watched the German troops retreat from the French, they shouted: “German soldiers had courage. It’s a disgrace that such an insulting film was made in America!” Because of the disruptions, the projectionist was forced to switch off the film. Nazi propagandist Joseph Goebbels gave a speech from the front row of the balcony in which he claimed that the film was an attempt to destroy Germany’s image. His comrades threw stink bombs and released mice into the crowd. Everyone rushed for the exits, and the theater was placed under guard.

The Nazis’ actions met with significant popular approval. The situation came to a climax Dec. 11, when the highest censorship board in Germany convened to determine the fate of the film. After a long discussion, the chairman of the board issued a ban: Whereas the French soldiers went to their deaths quietly and bravely, the German soldiers howled and shrieked with fear. The film was not an honest representation of German defeat — of course the public had reacted disapprovingly. Regardless of one’s political affiliation, the picture offended a whole generation of Germans who had suffered through the War.

All this was a result of the Nazis’ actions against All Quiet on the Western Front. Soon every studio started making deep concessions to the German government, and when Hitler came to power in January 1933, they dealt with his representatives directly.

And so, six days after the protests in Berlin, All Quiet on the Western Front was removed from screens in Germany. “Victory is ours!” Goebbels’ newspaper proclaimed. “We have forced them to their knees!” CLICK HERE to read the rest of the story on Hollywood Reporter