Thanks To Obama, Iran Moves Forward With Uranium Enrichment Technology

Iran is moving ahead with testing more efficient uranium enrichment technology, a spokesman for its atomic energy agency said on Saturday, in news that may concern world powers who... 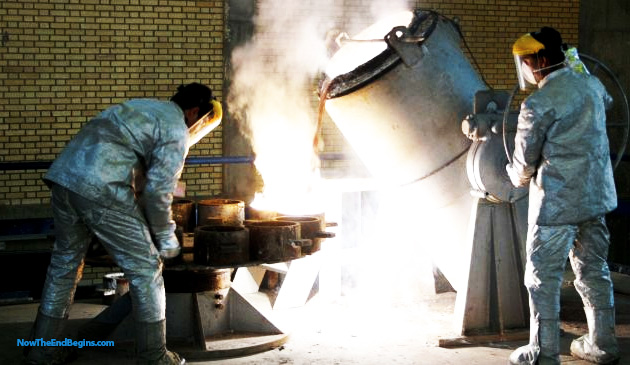 Iran is proceeding unhindered and at full speed towards the realization of their goal of obtaining nuclear weapons capable of destroying the nation of Israel. They have one man, and one man only, to thank for their amazing progress – Barack Hussein Obama. Thanks to him, sanctions have been eased, billions of dollars unfrozen and released back to the Iranians, and best of all Israel is not going to move to destroy their nuclear facilities any time soon.

Reuters Dubai – Iran is moving ahead with testing more efficient uranium enrichment technology, a spokesman for its atomic energy agency said on Saturday, in news that may concern world powers who last month agreed a deal to curb Tehran’s atomic activities.

Spokesman Behrouz Kamalvandi was quoted by state news agency IRNA as saying that initial testing on a new generation of more sophisticated centrifuges had been completed, underlining Iran’s determination to keep refining uranium in what it says is work to make fuel for a planned network of nuclear power plants.

Although the development does not appear to contravene the interim agreement struck between world powers and Iran last month, it may concern the West nonetheless, as the material can also provide the fissile core of a nuclear bomb if enriched to a high degree.

“The new generation of centrifuges was produced with a higher capacity compared with the first generation machines and we have completed initial tests,” Kamalvandi was quoted as saying.

“The production of a new generation of centrifuges is in line with the (Iranian atomic energy) agency’s approach of upgrading the quality of enrichment machines and increasing the rate of production by using the maximum infrastructure facilities”.

Kamalvandi said the International Atomic Energy Agency (IAEA) had been informed of the development.

Iran’s development of a new generation of centrifuges – machines that spin at supersonic speed to increase the ratio of the fissile isotope – could enable it to refine uranium much faster.

Under the November 24 interim accord with the six world powers, Iran promised not to start operating them or install any more for a period of six months. But the agreement seems to allow it to continue with research and development activity at a nearby Natanz pilot plant.

Iran earlier this year stoked the West’s worries by starting to install a new centrifuge – the IR-2m – at its Natanz enrichment plant. Iran is testing the IR-2m and other models at its research and development facility at Natanz.

Kamalvandi did not specify whether the new centrifuge model he was referring to was the IR-2m.

It is currently using a 1970s model, the IR1, to refine uranium at the main Natanz plant and its efforts to replace this breakdown-prone centrifuge are being closely watched.

Some experts believe the IR-2m can enrich uranium 2-3 times faster than the IR-1.

U.N. inspectors arrived in Tehran on Saturday and are due for the first time in more than two years to visit a plant linked to a planned heavy-water reactor that could yield nuclear bomb fuel, taking up an initial gesture by Iran to open its disputed nuclear programme up to greater scrutiny. source – Yahoo News