Thank You, Obama! US Military Celebrates New Ordinance Of Sodomy

As the highest-ranking member of the U.S. military to come out as gay, retired Rear Adm. Alan S. Steinman had much to celebrate when the repeal of “don’t ask,... 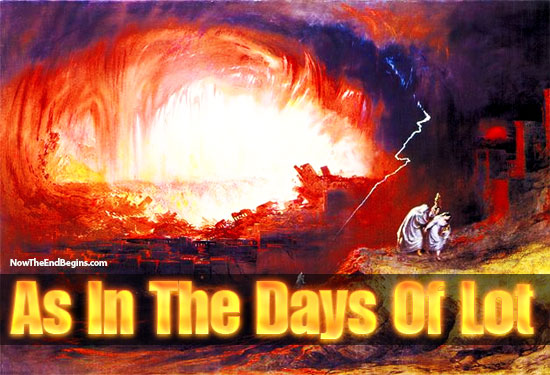 Creating an ordinance of homosexuality will bring God's judgment on America as a nation
by Geoffrey Grider September 21, 2011
NOW THE END BEGINS SHARE:

As In The Days Of Lot

“Likewise also as it was in the days of Lot; they did eat, they drank, they bought, they sold, they planted, they builded; But the same day that Lot went out of Sodom it rained fire and brimstone from heaven, and destroyed [them] all. Even thus shall it be in the day when the Son of man is revealed.” Luke 17:28-30

JOINT BASE LEWIS-McCHORD, Wash. — As the highest-ranking member of the U.S. military to come out as gay, retired Rear Adm. Alan S. Steinman had much to celebrate when the repeal of “don’t ask, don’t tell” became official.

To mark the occasion, Steinman invited friends to join him for a party at Joint Base Lewis-McChord, near Seattle – one of just a handful of such observances held on military bases Tuesday to mark the expiration of the military’s policy banning gays from serving openly.

At the conclusion of his speech, Steinman introduced Dallas Powers, his partner of 15 years. Since Powers serves in the U.S. Air Force, Steinman had been forced to keep their relationship a secret, until Tuesday. The announcement was greeted by a spirited round of applause from the group of officers and civilians in attendance, many of whom had been active in the same civil rights campaign.

Gay servicemembers around the country have been celebrating the policy’s demise at off-base parties since it officially expired at 12:01 a.m. Tuesday. Since political events are restricted on bases, Steinman billed his event as a private party to win permission from base commanders at Lewis-McChord to use an officers’ club. In keeping with the venue, Steinman’s party was considerably more subdued and formal than those that took place off base.

The party attracted a small group of high-ranking, formerly closeted gay officers who, based on their rank, felt particularly vulnerable to being exposed and then discharged under don’t ask, don’t tell.

“I was an admiral, living in a fishbowl,” said Steinman who retired from the U.S. Coast Guard in 1997 – four years after don’t ask don’t tell was instituted. “So people who knew who I was, but I didn’t know who they were.” source – MSNBC