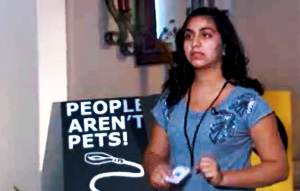 RFID Chip Tracking Now Becoming Mandatory In Schools Across US

RELATED STORY: See how the MARK OF THE BEAST is a part of our everyday life…

After months of protesting a policy requiring high school students to wear an RFID-enabled ID badge around their necks at all times, Andrea Hernandez is being involuntarily withdrawn from John Jay High School in San Antonio effective November 26th, according to a letter sent by the district that has now been made public.

Students and parents are rallying against new ID badges that track student movement on the campuses of two San Antonio, Texas schools. KSN.com

The letter, sent on November 13, informs her father that the Smart ID program, which was phased in with the new school year, is now in “full implementation” and requires all students to comply by wearing the location-tracking badges.

Since Andrea Hernandez has refused to wear the badge, she is being withdrawn from the magnet school and her program at the Science and Engineering Academy, and instead will have to attend William Howard Taft HS, which is not currently involved in the ID scheme, unless she changes her position.

Civil liberties lawyers at the Rutherford Institute told said that they are in the process of filing a temporary restraining order petition to prevent the school from kicking Hernandez out until further appeals can be made to resolve the matter. Representatives for John Jay did not return calls for comment by the time of publishing.

Andrea, backed by her family, has claimed the policy violates her religious beliefs and unduly infringes on her privacy. The controversial ID badge includes the photo and name of each student, a bar code tied to the student’s social security number, as well as an RFID chip which pinpoints the exact location of the individual student, including after hours and when the student leaves campus.

The battle over the IDs has been an ongoing saga. The Hernandez family has previously attended several school board meetings, organized protests and filed formal grievances with the district over the matter, and has been backed by numerous civil rights advocates.

In response to public outcry and pressure from rights groups, the school has offered to remove the battery and chip, but wouldn’t budge on mandating the ID. Their offer would also require the Hernandez family to end their criticism and agree to comply with and even tout the policy, something Andrea’s father Steve Hernandez finds unacceptable. 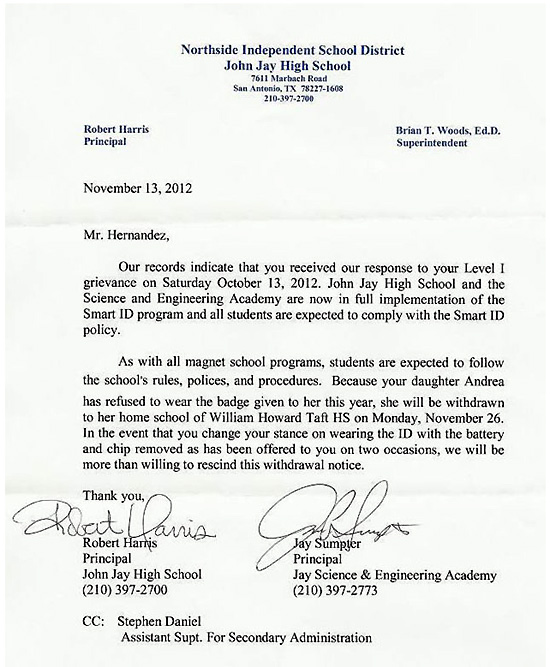 Steve Hernandez stated, “[A]s part of the accommodation my daughter and I would have to agree to stop criticizing the program and publicly support … it. I told [the Deputy Superintendent] that was unacceptable because it would imply an endorsement of the district’s policy and my daughter and I should not have to give up our constitutional rights to speak out against a program that we feel is wrong.”

Andrea has instead agreed to carry her original ID card, which was issued when she began at the school, and was told would be valid for her entire four years there.

But she has already been effectively punished for her non-compliance. She was not allowed to vote for Homecoming King & Queen because she didn’t have the proper identification, and has also been barred from some school functions. The school originally threatened to suspend, fine, or involuntarily transfer students who wouldn’t wear the ID once the program was fully instituted.

Deputy Superintendent Ray Galindo vowed in October that the consequences would be worse if Andrea did not change her mind: “I urge you to accept this solution so that your child’s instructional program will not be affected. As we discussed, there will be consequences for refusal to wear an ID card as we begin to move forward with full implementation,” Galindo wrote.

Hernandez’ case first made news back in August, when the school tried to impose the new technology at the start of the school year. John Jay HS, along with other participating schools, stands to receive $2 million dollars in state funding for a program supposedly instituted to reduce tardiness and truancy. However, Hernandez and other students only qualified for the magnet school by having good attendance, grades and test scores in the first place. source – InfoWars