More than 1,000 homes have burned in at least 57 wildfires across rain-starved Texas, most of them in one devastating blaze close to Austin that's still raging out of... 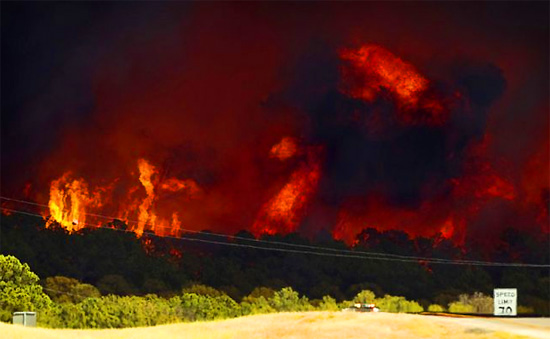 More than 1,000 homes have burned in at least 57 wildfires across rain-starved Texas, most of them in one devastating blaze close to Austin that’s still raging out of control, officials said Tuesday.

The Texas Forest Service said nearly 600 of the torched homes were in Bastrop County, some 25 miles from Austin. The agency said that blaze was still uncontained Tuesday. Fanned in part by howling winds from the remnants of Tropical Storm Lee, the blaze rapidly grew Tuesday to at least 30,000 acres.

“This is a very mean-looking fire,” Texas Gov. Rick Perry told Fox News Tuesday. “It is serious and it’s widespread,” he said, noting that firefighters from as far away as Oregon and California have been called to Texas to assist authorities.

At least 5,000 people were forced from their homes in Bastrop County and about 400 people were in emergency shelters, officials said Monday. School and school-related activities were canceled Tuesday.

In Bastrop, a town of about 6,000 people along the Colorado River, huge clouds of smoke soared into the sky and hung over downtown. When winds picked up, flames flared over the tops of trees. Helicopters and planes loaded with water flew overhead, and firefighters along a state highway outside the city converged around homes catching fire.

“Waiting is the most frustrating thing,” said Gina Thurman, 47, choking back tears as she sat by herself in the shade on a curb outside Ascension Catholic Church, one of several shelters in the area. “You’re sitting there and you don’t know anything but your house is probably burning.”

Rick Blakely was among about 30 people sleeping on cots at the church. The 54-year-old said he was in a state of shock and “not expecting anything to be standing” when he returned to his home.