It’s not the first time Pope Francis has mentioned the 1907 novel by Robert Hugh Benson, but his recommendation appears to be due to the daunting warning that is... 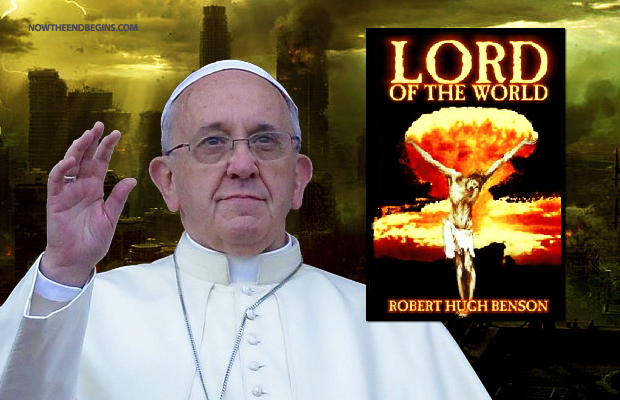 In an airplane news conference on his way back from the Philippines, Pope Frances referenced a 1907 book entitled “Lord of the World” and advised all of those in attendance to read it

“And upon her forehead was a name written, MYSTERY, BABYLON THE GREAT, THE MOTHER OF HARLOTS AND ABOMINATIONS OF THE EARTH.” Revelation 17:5 (KJV)

From the day he became pope, NTEB has always maintained that Pope Francis was a man on a mission and destined to fulfill end times bible prophecy in a big way. Evidentially, he would seem to agree with our assessment. The book he wants everyone to read is centered around two main people – the Antichrist and the Catholic pope. Seriously, we couldn’t make this stuff up.

It’s not the first time Pope Francis has mentioned the 1907 novel by Robert Hugh Benson, but his recommendation appears to be due to the daunting warning that is contained in the novel’s plot line.

“Lord of the World” portrays a dystopian vision of the future and culminates in the final battle between humanism and Catholicism, which eventually leads to Armageddon. The author depicts a Marxist world in which a charismatic senator from Vermont named Julian Felsenburgh promises world peace if world’s citizens follow him obediently.

He is made president of Europe, and then the world, due to his charisma and promises of utopia, but little remains known about him, even after his rise to power. He replaces the belief in God with secularism and tortures and kills those who oppose his doctrine.

As it becomes clear that the Felsenburgh is, in fact, the “anti-Christ,” the Pope gathers with the Cardinals in Rome in an effort to avoid the coming apocalypse. In the end, Felsenburgh ends up destroying Rome, killing the Pope and with the assistance of other world leaders and destroys the remaining vestiges of faith on Earth.

Pope Francis has mentioned “Lord of the World” on several occasions and says that it depicts what he refers to as “ideological colonization” and in a sermon in 2013 described it as depicting “the spirit of the world which leads to apostasy almost as if it were a prophecy.”

In his 2005 book “Literary Giants, Literary Catholics” British writer and former director of the Center for Faith and Culture at Aquinas College, Joseph Pearce described the book as a “..novel-nightmare” that “…is coming true before our very eyes.”

“The world depicted in Lord of the World is one where creeping secularism and godless humanism have triumphed over traditional morality. It is a world where philosophical relativism has triumphed over objectivity; a world where, in the name of tolerance, religious doctrine is not tolerated. It is a world where euthanasia is practiced widely and religion hardly practiced at all. The lord of this nightmare world is a benign-looking politician intent on power in the name of “peace”, and intent on the destruction of religion in the name of “truth”. In such a world, only a small and shrinking Church stands resolutely against the demonic “Lord of the World”

It is unclear whether Pope Francis believes that the apocalypse is nigh, but he clearly views the book as a warning to people of faith about the consequences of the choices that humanity makes.