Russian Foreign Minister Sergei Lavrov announced the deliveries had started during a UN press conference. He said the anti-aircraft system “will be devoted to ensure 100 percent safety and security of our men in Syria.” Lavrov’s announcement came in the wake of the downing of the Russian plane. The Russian defense ministry also announced it would begin jamming radars of military planes striking targets in Syria from off the coast of the Mediterranean.

Prime Minister Benjamin Netanyahu has criticized Russia’s decision to provide advanced anti-aircraft systems to Syria as “irresponsible,” but said Israel was committed to continued deconfliction with Moscow in its military operations in the region.

Things are about to get very interesting in the Middle East. On Friday, Russia made good on their threat to send S-300 anti-aircraft missiles to Syria after a Russian military jet was accidentally shot down by Syrian forces after an Israeli raid on Iranian weapons depot near the Damascus Airport. The presence of the S-300 in Syria will make Israeli strikes on Iran in Syria much more difficult and risky.

Not only that, but Russia is also deploying electronic warfare equipment that will jam the electronics of Israeli jets from the moment they cross into Syrian airspace. The potential for a military clash between Russia and Israel is rapidly heading to an all-time high.

FROM TIMES OF ISRAEL: Speaking to CNN in New York after the annual UN General Assembly, Netanyahu said that he spoke to Russian President Vladimir Putin earlier this month after Syrian forces responding to an Israeli airstrike mistakenly shot down a Russian military reconnaissance plane, killing all 15 people on board.

Netanyahu said he told Putin, “Let’s continue this deconfliction, but at the same time, I told him very respectfully and very clearly that Israel will do, will continue to do what it has to do to defend itself.”

He said both sides wanted to avoid a military clash in Syria, noting that the many militaries and other groups operating in the region were making it “very crowded over there in this tiny space.

“Through this mess, we’ve been able for three years to avoid any clash between … between Russian and Israeli forces,” he said. “I think there’s a desire on both our part and Russia’s part to…. avoid a clash.”

Russian Foreign Minister Sergei Lavrov announced the deliveries had started during a UN press conference. He said the anti-aircraft system “will be devoted to ensure 100 percent safety and security of our men in Syria.” Lavrov’s announcement came in the wake of the downing of the Russian plane. 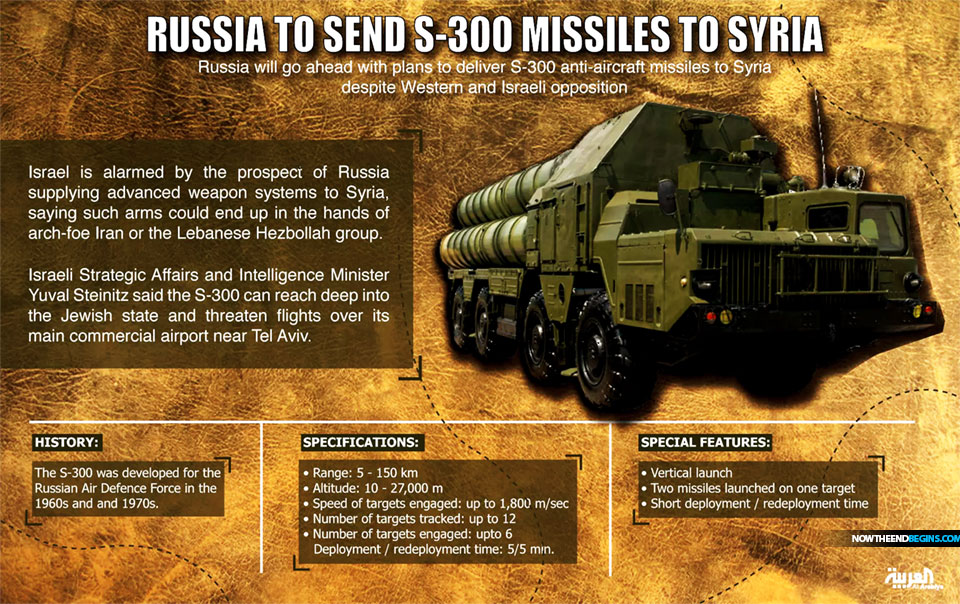 The Russian defense ministry also announced it would begin jamming radars of military planes striking targets in Syria from off the coast of the Mediterranean.

Russian electronic warfare equipment intended to disrupt airstrikes has already arrived in Syria, according to Russian media reports. According to the Moscow-based Izvestia daily newspaper, the electronic warfare equipment arrived at Hmeimim Air Base near Latakia on Monday, aboard Il-76 transport aircraft. Without detailing exactly what was sent, the sources noted that the systems were intended to disrupt airborne radar, aircraft communication and controls and satellite navigation systems used in attack jets, drones and guided munitions.

Both Israel and the United States have protested the decision to supply Syria with the S-300, which could complicate ongoing Israeli efforts to prevent Iran deepening its military presence in Syria and to thwart the transfer of weapons in Syria to Hezbollah.

Israel has vowed to continue its operations.

On the sidelines of the UN General Assembly this week, Netanyahu said after meeting US President Donald Trump that the US president gave him various unspecified guarantees regarding Israel’s freedom of operation in Syria. “I received what I asked for. I came with specific points and I got them,” he told reporters.

Israel has carried our hundreds of attacks against Syrian and Iranian targets in Syria over the last several years, with fighter jets going nearly unchallenged by the country’s air defenses — though an F-16 was downed by a Syrian anti-aircraft missile in February in what the IDF later said was the result of a professional error by the pilots.

Jerusalem has vowed to prevent Lebanon-based Hezbollah or Iranian proxy militias in Syria from obtaining advance weapons that could threaten the Jewish state and has worked to keep Iran from gaining a foothold in Syria that can be used to attack Israel. READ MORE