The Temple Institute in Jerusalem produced, for the first time in 2000 years, the first flask of pure olive oil fit for use in the Temple’s Menorah.... 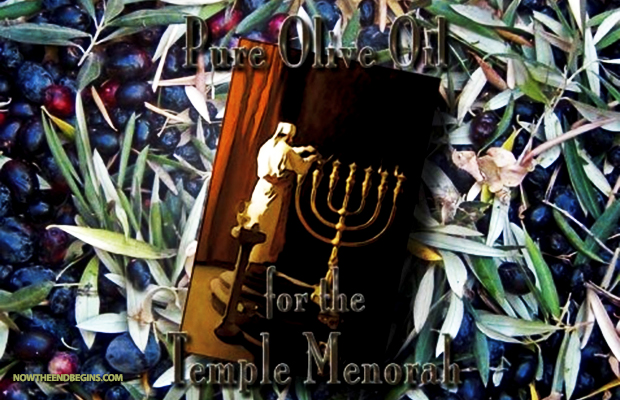 First time in 2,000 years that pure olive oil for Temple use has been produced

“Command the children of Israel, that they bring unto thee pure oil olive beaten for the light, to cause the lamps to burn continually.” Leviticus 24:2

For the past 30 years, the Temple Institute in Jerusalem, Israel, has been on a prophetic mission to prepare the world for the creation of the Third Jewish Temple. They have worked diligently to create, according to strict Levitical law, the garments, furniture, and instruments of worship that will be needed. Today, NTEB sources in Israel have received word that the pure olive oil required for the burning of the Temple lamps has been produced and is being stored in Jerusalem in anticipation of use in the coming Temple.

The rebuilt Third Jewish Temple will fulfill the Daniel 9:27 prophecy.

The Temple Institute in Jerusalem produced, for the first time in 2000 years, the first flask of pure olive oil fit for use in the Temple’s Menorah.

150 kg of organic olives from the Golan Heights were used to make 4 1/2 liters of olive oil, which were produced under special conditions to maintain their ritual purity and then stored in clay flasks specially made for the oil.

Brothers and sisters, we are living in momentous days of prophecy! The Third Jewish Temple, which must be in place after the Rapture and during the time of Jacob’s Trouble, otherwise known as the Great Tribulation, is soon to come on the world stage. Daniel the prophet, in 9:27, clearly shows that the rebuilt Jewish Temple is in place when the Abomination of Desolation enters it and will defile it.

This prophecy about the Antichrist in Daniel is confirmed in the New Testament by Jesus Christ Himself in Matthew 24:

“When ye therefore shall see the abomination of desolation, spoken of by Daniel the prophet, stand in the holy place, (whoso readeth, let him understand:)” Matthew 24:15

Matthew 24 is a complete chronicling of what life on earth will be like during the time of the Great Tribulation. The church is not mentioned here as it has already been removed in the Rapture. The people that Jesus is primarily addressing will be the Jews living in Israel, even though the Tribulation is a worldwide event.

As the Age of Grace, the Church Age dispensation, comes to a close, an unsaved world is preparing itself to go through it’s absolute darkest hour. It will be a time of violence, tragedy and wickedness such as this world has never seen. But there is still time to get in the ark, there is still time to accept the forgiveness of sins made possible by shed blood of the Lamb of God that takes away the sins of the world – Yeshua Ha’Masciach.

“Because thou hast kept the word of my patience, I also will keep thee from the hour of temptation, which shall come upon all the world, to try them that dwell upon the earth.” Revelation 3:10