The Israeli military said it fired artillery shells at several Syrian targets Thursday evening, hours after four rockets were fired into Israel from across the border, hitting northern Israel... 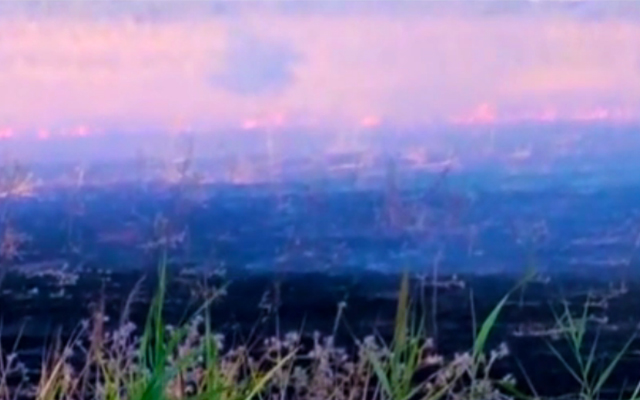 The Israeli military said it fired artillery shells at several Syrian targets Thursday evening, hours after four rockets were fired into Israel from across the border, hitting northern Israel and sparking several fires.

Media reports in Syria said at least four Israeli shells were fired at Syrian military positions in the Quneitra area in the Syrian Golan. There were unconfirmed reports of casualties on the Syrian side, according to the Syrian Observatory for Human Rights.

The army had earlier blamed Syrian operatives of the Palestinian Islamic Jihad terror group for the rocket attack and said they were receiving orders and finances from Iran. “We consider Syria to be responsible for the fire and it will also suffer the results,” the army said in a statement posted to Twitter slightly after 8 p.m.

Two of the rockets struck open areas in the Golan Heights and two others landed in the Upper Galilee far from the border with Syria. The IDF said they were fired at Israel from the center of the Syrian Golan Heights. No injuries or damages were caused by the rocket fire, though they did spark a number of grass fires, which firefighters from across the north were able to extinguish within hours.

An Islamic Jihad member denied the group was behind the attack and said it was an attempt to distract the public from the cause of Palestinian detainee Mohammed Allaan, who ended a two month hunger strike earlier Thursday, Israeli news site Maariv reported.

Members of Islamic Jihad, which is known to have rockets in Gaza, had threatened to attack Israel earlier in the week over the fate of Allaan, who it says is part of the terror group. The army placed Iron Dome anti-missile batteries around the southern cities of Ashdod and Beersheba in response.

An unnamed senior Israeli official told Channel 2 news that the Israeli response may include more than artillery fire. He did not elaborate.

Eli Malka, head of the Golan Regional Council, told Channel 2 residents were prepared for such attacks due to the deteriorating situation in Syria.

“We trust the Israel Defense Forces and the government to respond forcefully to destroy targets from which rockets were fired at Israel, and to prevent the development of a terror infrastructure” in the area, he said.

On Tuesday, Prime Minister Benjamin Netanyahu, Defense Minister Moshe Ya’alon and top military officials visited the northern border and warned that Iranian money freed up in the nuclear deal would be funneled to terror groups on Israel’s borders.

“We are ready for any eventuality. Those who try to attack us – we will hurt them,” Netanyahu said.

The visit came days after Israeli troops held a large-scale drill in Israel’s north to prepare for the possibility of a massive attack from either Syria or Lebanon, including the possibility of an Israeli offensive into Syria following a rocket barrage.

The Syrian rockets had landed in the northern Galilee and the Golan Heights at about 5:45 p.m. Sirens sounded in several communities in the north. No injuries were reported, the army said. Two of the rockets landed near a kibbutz in the Hula Valley in the Upper Galilee, according to Israeli media reports.

If the rockets were shot intentionally from Syria, it would be the first time sine 1973 that Israel was purposefully targeted by rockets from Syria. Stray mortar shells from internecine fighting in Syria occasionally explode in Israeli territory, usually drawing an Israeli response.

Israel has also reportedly struck targets inside Syria and near the border to stop weapons transfers to Hezbollah and stymie attacks, including a January strike that left top Hezbollah member Jihad Mughniyeh dead, along with an Iranian general and several other militants. source