Syrian security forces shot dead at least 20 protesters on Friday as hundreds of thousands of people staged the biggest protests so far against President Bashar al-Assad, witnesses and... 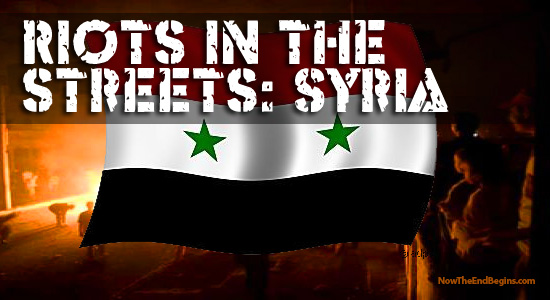 "We have said Syria can't go back to the way it was before, that Assad has lost his legitimacy in the eyes of his own people," U.S. Secretary of States Hillary Clinton told a news conference in Istanbul.
by Geoffrey Grider July 15, 2011
NOW THE END BEGINS SHARE:

"We have said Syria can't go back to the way it was before, that Assad has lost his legitimacy in the eyes of his own people," U.S. Secretary of States Hillary Clinton told a news conference in Istanbul.

Assad, facing the greatest challenge to 40 years of Baath Party rule, has sought to crush demonstrations that broke out in March. But although rights groups say some 1,400 civilians have been killed, the protests have grown.

“These are the biggest demonstrations so far. It is a clear challenge to the authorities, especially when we see all these numbers coming out from Damascus for the first time,” said Rami Abdelrahman, head of the Syrian Observatory for Human Rights.

Activists and witnesses said police fired live ammunition and teargas in the capital Damascus and suburbs, killing at least 11 people. They killed four in the southern city of Deraa, the cradle of the Syrian uprising, near the Jordanian border.

Three protesters were shot dead in the northwestern province of Idlib, near the Turkish border, where troops and tanks have attacked villages, the witnesses and activists said. Two people were also killed in the city of Homs.

Until now, the biggest demonstrations have taken place in impoverished towns and villages outside Damascus where one in 10 of Syria’s 20 million population lives. Protests in the capital have rarely mustered more than a few hundred people.

Damascus has benefited from substantial foreign investment and its citizens are on average wealthier than those in the provinces. Security is also much tighter.

Activists estimate the number of secret police on the streets of Damascus has more than doubled since protests started but the economy has stagnated. Faced with uncertainty, foreign investors are pulling out in droves and unemployment is rising.

To counter that, Syria’s main ally, Iran, is considering offering $5.8 billion in financial help, including a three-month loan worth $1.5 billion to be made available immediately, French business newspaper Les Echos said, citing a report by a Tehran think-tank linked to Iran’s leadership.

International sanctions are targeted at Syria’s leaders, not at its banks and companies. But France and the United States are pressing for tougher penalties, and a United Nations Security Council resolution condemning the crackdown, following attacks on both countries’ embassies in Syria.

“We have said Syria can’t go back to the way it was before, that Assad has lost his legitimacy in the eyes of his own people,” U.S. Secretary of States Hillary Clinton told a news conference in Istanbul.

“We, along with many others in the region and beyond, have said we strongly support a democratic transition,” she said. “The ultimate destiny of the Syrian regime and Syrian people lies with the people themselves.” source – Reuters