U.S. officials say the Syrian military has loaded active chemical weapons into bombs and is awaiting a final order from embattled President Bashar Assad to use the deadly weapons... 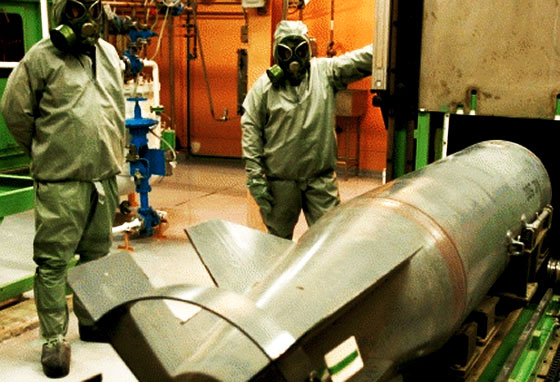 U.S. officials say the Syrian military has loaded active chemical weapons into bombs and is awaiting a final order from embattled President Bashar Assad to use the deadly weapons against its own people.

NBC News reports that on Wednesday the Syrian military loaded sarin gas into aerial bombs that could be deployed from dozens of aircraft. The last large-scale use of sarin was in 1988, when former Iraqi President Saddam Hussein’s forces killed 5,000 Kurds in a single attack.

However, U.S. officials told NBC that the sarin bombs had not yet been loaded onto planes but added if Assad gives the final order, “there’s little the outside world can do to stop it.”

The Syrian government has previously insisted that it would not use chemical weapons against its own people.

For months, the Obama administration has described the Assad regime as being on the verge of collapse. If the Syrian government were to be toppled from outside forces or from within, it would bethe first nation possessing weapons of mass destruction to do so.

U.S. Secretary of State Hillary Clinton has as recently as last week warned of the possibility that Assad could use chemical weapons against his own people. After meeting other NATO foreign ministers in Brussels last week, Clinton told the gathering, “Our concerns are that an increasingly desperate Assad regime might turn to chemical weapons, or might lose control of them to one of the many groups that are now operating within Syria.”

“We have sent an unmistakable message that this would cross a red line and those responsible would be held to account,” she said.

At the end of the meeting, NATO Secretary General Anders Fogh Rasmussen backed up Clinton’s threat, declaring that the international community could take military action against Assad and his forces.