Hannes Sjoblad says he and the Swedish Biohacking Group have objective - preparing us all for the day when others want to chip us. ... 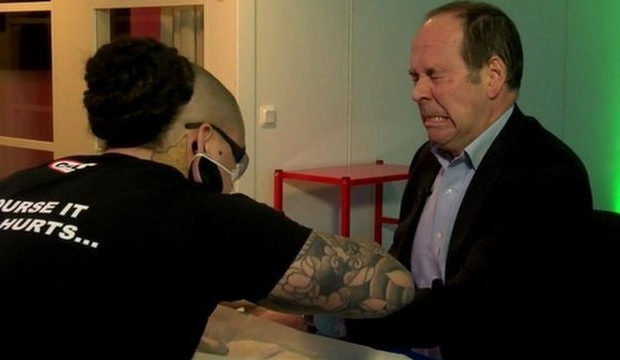 Want to gain entry to your office, get on a bus, or perhaps buy a sandwich? We’re all getting used to swiping a card to do all these things. But at Epicenter, a new hi-tech office block in Sweden, they are trying a different approach – a chip under the skin.

After the Rapture of the Church, the unsaved will not only have to face the Antichrist, they will also have to decide whether or not to willingly receive his mark in either in their right hand or in their forehead. So in preparation of that day, the Devil is working overtime to mentally condition people right now that human chip implantation is not only beneficial, but that it’s also unavoidable.

Felicio de Costa, whose company is one of the tenants, arrives at the front door and holds his hand against it to gain entry. Inside he does the same thing to get into the office space he rents, and he can also wave his hand to operate the photocopier.

That’s all because he has a tiny RFID (radio-frequency identification) chip, about the size of a grain of rice, implanted in his hand. Soon, others among the 700 people expected to occupy the complex will also be offered the chance to be chipped. Along with access to doors and photocopiers, they’re promised further services in the longer run, including the ability to pay in the cafe with a touch of a hand.

On the day of the building’s official opening, the developer’s chief executive was, himself, chipped live on stage. And I decided that if was to get to grips with this technology, I had to bite the bullet – and get chipped too.

Hannes Sjoblad says he and the Swedish Biohacking Group have objective – preparing us all for the day when others want to chip us. “We want to be able to understand this technology before big corporates and big government come to us and say everyone should get chipped – the tax authority chip, the Google or Facebook chip.” Then, he says, we’ll all be able to question the way the technology is implemented from a position of much greater knowledge.

Read the rest of this story on BBC…