Surveillance cameras are now so powerful they are able to zoom in and read your text messages - leading to fears of further privacy intrusion by a 'Big Brother'... 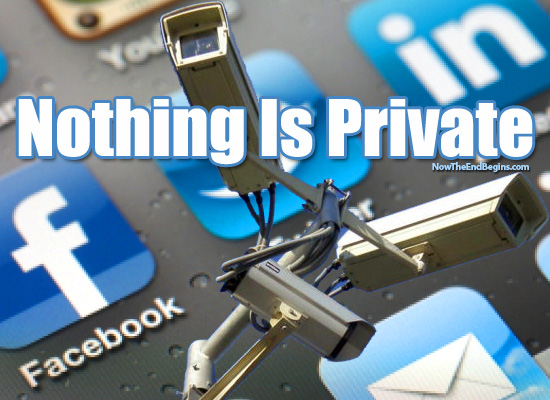 The first step was getting us hooked on social media and smart phones. The second step is monitoring everything we see, say and do. The third step will be telling us what we can see, say and do.
by Geoffrey Grider May 7, 2012
NOW THE END BEGINS SHARE:

Privacy is an antiquated notion once held by our grandparents

Surveillance cameras are now so powerful they are able to zoom in and read your text messages – leading to fears of further privacy intrusion by a ‘Big Brother’ style state.

The first step was getting us hooked on social media and smart phones. The second step is monitoring everything we see, say and do. The third step will be telling us what we can see, say and do.

As well as being advanced enough to close in on an individual’s phone screen, security cameras will soon be able to pick up on raised voices and sniff out drugs too.

The revelations were made at a privacy conference in Wellington, New Zealand, where it was also disclosed that the average person is digitally recorded about a dozen times a day. During last year’s Rugby World Cup in New Zealand CCTV cameras focused in on the crowd of thousands to read the text message someone was sending.

As part of extensive police monitoring during the tournament, camera operators scanned the spectators looking for suspicious looking packages and aggressive behaviour.

They then chose to zoom in on one man who was texting – although it turned out he was simply writing about the poor quality of the rugby match. Experts warned the fact that the cameras were able to do this raises concerns about breeches of individual’s privacy.

Civil liberties lawyer Michael Bott described the pervasiveness of surveillance as ‘worrying’ and warned of the extent people’s private lives were being intruded upon.

‘It’s quite worrying when we, by default, move to some sort of Orwellian 1984 where the state or Big Brother watches your every move,’ he said.

‘The road to hell is paved with good intentions and we don’t realise what we are giving up when we give the state the power to monitor our private lives.’

However, others argued the camera’s ability to zoom in on texts would be helpful in preventing crimes, including rioting. The conference also discussed how technological developments meant that soon cameras will be able to pick up on raised voices and sniffing devices will be able to detect drug residue.

Of course, the number of surveillance cameras drastically varies from place to place  with exact figures hard to pin down. Cameras are commonplace on streets, public transport, shopping malls, hospitals and public buildings.

In the decade after the 9/11 attacks the amount of surveillance cameras across the U.S soared by about 30 million. And figures showed the number of cameras in some areas of Manhattan increased by more than 400 per cent between 1998 and 2005. Across the pond, Britain is notorious for the high amount of cameras it has with an estimated 2 million across the country. source – Daily Mail