A divided U.S. Supreme Court overturned the federal law that defines marriage as a heterosexual union, saying it violates the rights of married gay couples by denying them government... 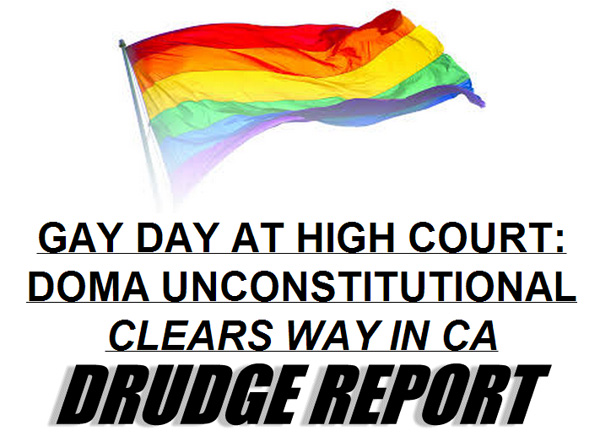 All this can be directly traced back to the work that Barack Obama is doing to undermine America from its foundation. His goal is a pink America, a modern-day Sodom and Gomorrah that is just daring God to do something about it. And guess what? Thats exactly what is about to happen.

“And it repented the LORD that he had made man on the earth, and it grieved him at his heart.” Genesis 6:6

From Bloomberg: A divided U.S. Supreme Court overturned the federal law that defines marriage as a heterosexual union, saying it violates the rights of married gay couples by denying them government benefits.

The vote on the Defense of Marriage Act was 5-4. Justice Anthony Kennedy joined the four Democratic-appointed justices in the majority.

The law “places same-sex couples in an unstable position of being in a second-tier marriage,” Kennedy wrote for the court. “The differentiation demeans the couple, whose moral and sexual choices the Constitution protects, and whose relationship the state has sought to dignify.”

The court will act momentarily on a second gay-marriage case, involving California’s Proposition 8, which bars same-sex couples from marrying.

The historic cases, which marked the first time the high court had ever considered gay-marriage rights, reached the justices as the movement was showing unprecedented momentum. Twelve states and the District of Columbia have legalized same-sex marriage, six of them in the last year.