Amazing Breaking News For President Trump As The 4 Conservative Supreme Court Justices Have Now Been Reassigned To Cover MI, WI, PA And GA!

Barrett was assigned to the 7th Circuit, where she served as a judge for three years before becoming a justice. Two other justices, Sonia Sotomayor and Neil Gorsuch, were also assigned for the first time to the circuits where they had previously served as judges – Sotomayor to the 2nd Circuit and Gorsuch to the 10th Circuit. Kavanaugh, who had previously been assigned to the 7th Circuit, also took on the 8th Circuit, ceding the 7th Circuit to Barrett. These are the circuits that the SCOTUS has oversight on and which justice is “in charge” of being the lead in the cases the are brought from those circuits. So cases appealed from those circuits are decided by those judges. This means that emergency requests issued concerning cases in those states will go to the more conservative judges.

Incredible breaking news arrived for President Trump and his legal team from the Supreme Court as we learn that the 4 Conservative judges have been reassigned to the 4 Liberal states where Dominion Voting voter fraud is suspected.

This is unbelievable news coming out of Washington tonight, as we learn that the 4 Supreme Court justices have been reassigned to the 4 Democrat-controlled states of MI, WI, PA and GA, where President Trump and his team insist votes have been manipulated and switched. This means that if Sidney Powell really has the proof she insists she has to prove that the vote was hacked through Dominion Voting, we could be on the edge of the most-explosive period in America history.

On our Prophecy News Podcast this afternoon, we talked all about Sidney Powell and the tsunami of proof she says she is in possession of right now, and we talked about how there needed to be some sort of “wildcard” to make it all happen legally and in a very short timeframe. The fact that late-breaking news of Kavanaugh reassigned to MI, Barrett to WI, Alito to PA and Thomas to GA is nothing short of a miracle. One this is for absolute certain, this thing is only not over, it is far from over. Now that you know this news, do you see how incredibly important it was for Trump to get Amy Coney Barrett confirmed as fast as he did? Talk about a wild ride. It’s been a very long time since I’ve used an exclamation point in an article headline, but I am using one right now. This is big, very, very big.

I don’t know the full legal implications of this move as it pertains to Dominion Voting and the alleged vote switching, but this much I do know. I know that when Sidney Powell brings her ‘tsunami of proof’ to MI, WI, PA and GA, she is going to have 4 very motivated and engaged Supreme Court justice deciding the path forward. That is very close to a best case scenario, and if I were Sidney Powell, I would right now double and maybe triple my security detail. Maybe even get a food taster.

All week long, when people have been asking me what I think will happen, I have given the same answer repeatedly. I said that so far, it doesn’t look like God has cast His vote yet. After receiving this news tonight, I am starting to think He just did. Let’s see what happens next, buckle up.

Circuit Courts Have Been Reassigned – Guess Who Is In Charge Of MI, WI, PA, And GA? 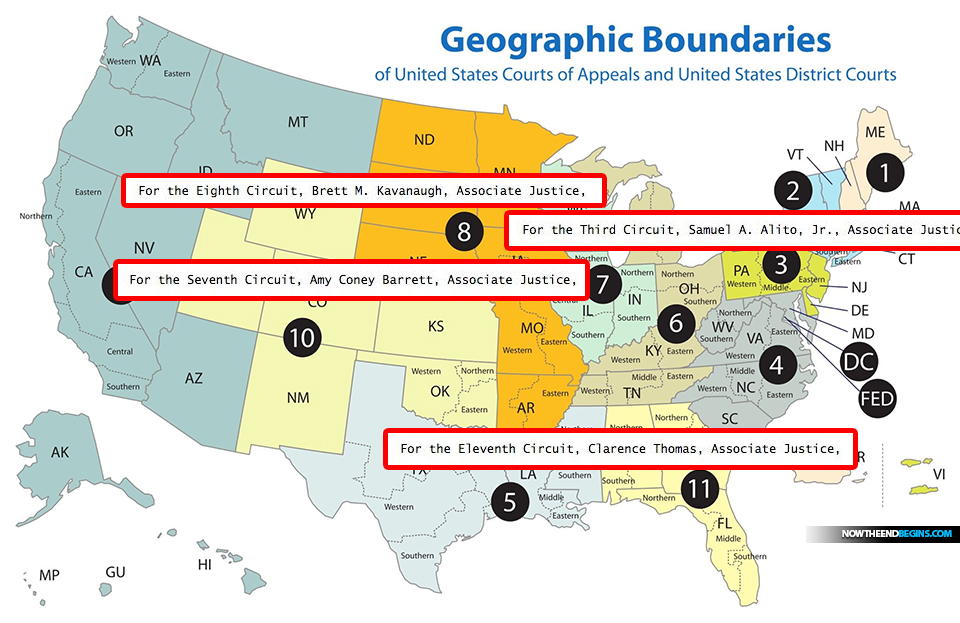 Amy Coney Barrett was assigned to the 7th Circuit, where she served as a judge for three years before becoming a justice. Two other justices, Sonia Sotomayor and Neil Gorsuch, were also assigned for the first time to the circuits where they had previously served as judges – Sotomayor to the 2nd Circuit and Gorsuch to the 10th Circuit.

This means that emergency requests issued concerning cases in those states will go to the more conservative judges. READ MORE

Rudy Giuliani, Sidney Powell, and Jenna Ellis talk about the multitude of legal cases that the Trump Administration is bringing to court. As cases stack up more than 1,000 affidavits have been signed testifying to voter malfeasance. You will be surprised an appalled at the allegations that are coming to light.