Strong Delusion: The Lucis Trust And The United Nations Pt. I (VIDEO)

“The United Nations is steadily becoming the center of a syncretic new world religion, a weird and diabolical convergence of New Age mysticism, pantheism, aboriginal animism, atheism, communism, socialism, Luciferian occultism, apostate Christianity, Islam, Taoism, Buddhism, and Hinduism. The devotees and apostles of this new faith include the kind of strange admixture of crystal worshipers, astrologers, radical feminists, environmentalists, cabalists, human potentialists, Eastern mystics, pop psychologists, and “liberal” clergymen one would normally tend to associate with the off-beat, sandals-and-beads counterculture of the 1960s.

The coming strong delusion that will take place after the Rapture

When most people think of the United Nations, they think of an organization which is called upon to mediate, when countries are at odds with one another. People also believe that the U.N. intervenes in that which is considered inhumane treatment of the masses by governing authorities.

“Now we beseech you, brethren, by the coming of our Lord Jesus Christ, and by our gathering together unto him, That ye be not soon shaken in mind, or be troubled, neither by spirit, nor by word, nor by letter as from us, as that the day of Christ is at hand. Let no man deceive you by any means: for that day shall not come, except there come a falling away first, and that man of sin be revealed, the son of perdition; Who opposeth and exalteth himself above all that is called God, or that is worshipped; so that he as God sitteth in the temple of God, shewing himself that he is God.” 2 Thessalonians 2:1-4 (KJV)

But the reality is that this organization has its roots and foundation in Occultism. The intent of this article is to educate those who love the Lord Jesus Christ, and want to understand the Strong Delusion, which is coming. The U.N. will be the main vehicle by which deception and delusion comes to the earth. 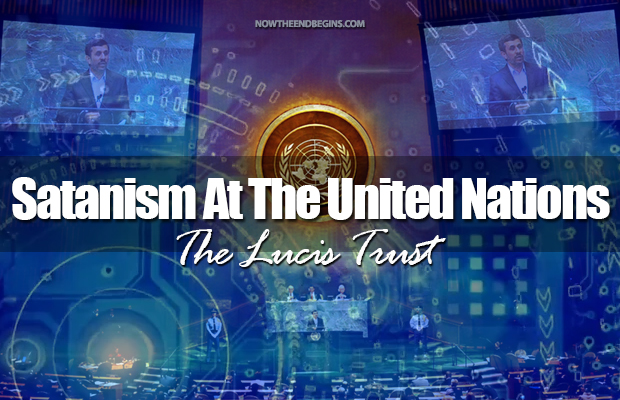 As I researched and wrote my findings, the evilness was so thick and burdensome, I asked my husband to please cover me with prayer to the Father, which he is doing several times a day.

Alice Ann Bailey, a leading disciple of the Russian theosophist Madame Helena Blavatsky, formed the Lucifer Trust in 1920. In 1922, the name was changed to Lucis Trust. I can only imagine that this was done after realizing that the name of Lucifer would certainly alarm many who read and love the Word of God. But make no mistake, the inner workings and thrust of this group remained the same.

Madame Helena Blavatsky is known as the “mother” of the New Age movement and modern occultism. In her “Secret Doctrine” she taught that Lucifer was higher and older than the God of the Bible, and that Lucifer had to be sacrificed and sent to earth, because of the coming dogma of the Church.

She taught that Satan was truly “good” and that he was known by many names, but mainly as God of Wisdom — the cosmic reflection of God. She also called him “Son of the morning” and in many writings, called him Son of God.

After years of contact with her so-called spirit masters,(we know they are demons) Blavatsky published “Isis Unveiled” in 1877; a hugely successful writing, followed by “Secret Doctrine” in 1888. She also established an Occult magazine in London, called “Lucifer.”

By this time, Blavatsky had acquired a huge following.

Sarah McKechnie is the International President of the Lucis Trust which was founded by Alice and Foster Bailey in 1922 and originally named the Lucifer Publishing Company, to release Alice’s writings which examined the principles and secrets of the Ageless Wisdom. Out of the Trust came The Arcane School, a free correspondence program that helps to develop the spiritual consciousness of an international student body, while guiding them in the growing awareness of their soul’s true purpose. Lessons are taught in eight languages and emphasizes study, meditation and service to humankind.

While Christianity teaches that Lucifer is the essence of evil, the New Age teachers embrace him as enlightened, and one to be worshiped. As he is adored, our God is detested. In occultism and New Age philosophy, Lucifer is regarded as an agent of intellectual and spiritual freedom. We who are born-again from above, know that Lucifer was cast from heaven by our God, after Lucifer had determined to be like the most high God:

“How art thou fallen from heaven, O Lucifer, son of the morning! [how] art thou cut down to the ground, which didst weaken the nations! For thou hast said in thine heart, I will ascend into heaven, I will exalt my throne above the stars of God: I will sit also upon the mount of the congregation, in the sides of the north: I will ascend above the heights of the clouds; I will be like the most High. Yet thou shalt be brought down to hell, to the sides of the pit.”  – Isaiah 14:12-15

Alice Ann Bailey received her knowledge from “Ascended Masters” departed spirits. As Christians, we know that these spirits are merely demons, doing the bidding of their master – the devil. We know that Lucifer’s name was changed to Satan after being cast from heaven, the Luciferians continue to refer to him as Lucifer.

What does this have to do with the UN?

The Lucis Trust has been for years, the philosophical and religious consulting firm to all members of the U.N. It is interwoven into the fabric of the United Nations, and done so in such a deceptive way. The average person knows little to nothing of the Lucis Trust.

“We have meditations at the United Nations a couple of times a week. The meditation leader is Sri Chin, and this is what he said about this situation: “… The United Nations is the chosen instrument of God; to be a chosen instrument means to be a divine messenger carrying the banner of God’s inner vision and outer manifestation. One day, the world will treasure and cherish the soul of the United Nations as its very own with pride, for this soul is all-loving, all-nourishing, and all-fulfilling.” – Donald Keys, president of Planetary Citizens and author of Earth At Omega

“The United Nations is steadily becoming the center of a syncretic new world religion, a weird and diabolical convergence of New Age mysticism, pantheism, aboriginal animism, atheism, communism, socialism, Luciferian occultism, apostate Christianity, Islam, Taoism, Buddhism, and Hinduism. The devotees and apostles of this new faith include the kind of strange admixture of crystal worshipers, astrologers, radical feminists, environmentalists, cabalists, human potentialists, Eastern mystics, pop psychologists, and “liberal” clergymen one would normally tend to associate with the off-beat, sandals-and-beads counterculture of the 1960s.

But today’s worshipers in this rapidly expanding movement are as likely to be scientists, diplomats, corporate presidents, heads of state, international bankers, and leaders of mainstream Christian churches.” [1] source

As frightening and bizarre as this all may seem to us, it makes perfect sense that Satan would establish an institution such as the U.N. to unleash his diabolical deception and delusion upon the lost world. It is said “Knowledge is power.” For believers, having this knowledge of the U.N., and what is REALLY happening there, will help us to discern the times, and perhaps even to open the eyes of some of the unbelieving unsuspecting world.

Part 2 of this article coming up next week.