Stores To Use Facial Recognition Technology and Tracking To Increase Sales

Industry expert Rafe Needleman believes it's just a matter of time before stores not only to recognize you, but track your spending habits. “When you walk into a store,... 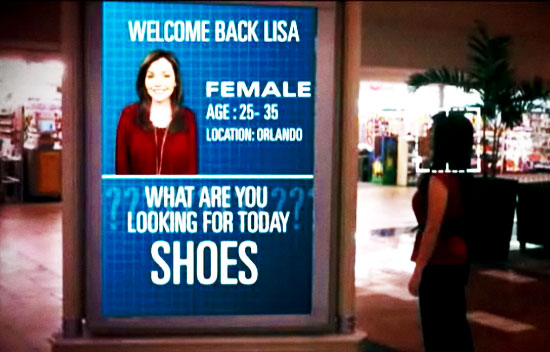 What was once the private domain of conspiracy theorists is now everyday life on Mainstreet, USA
by Geoffrey Grider February 23, 2012
NOW THE END BEGINS SHARE:

Privacy advocates concerned when faces and names are matched

RELATED STORY: For more on this amazing new technology, please visit the 666 Surveillance System and the Mark of the Beast…

ORLANDO, Fla. – A decade ago, in the Dreamworks movie “Minority Report,” billboards spoke directly to the characters in the movie and even knew their names. In just weeks, that science fiction plot will become reality as some businesses in Central Florida will know who you are when you walk through their door.

What was once the private domain of conspiracy theorists is now everyday life on Mainstreet, USA

It’s not unusual to see surveillance cameras. They’re inside businesses, outside of homes, even on the streets. In public places, people are comfortable with knowing those cameras are there for safety, but this new technology allows cameras to not just see what people do, but know who they are.

Shops and malls across the country are already taking this a step further. There are now billboards, made by Immersive Labs in Manhattan, and kiosks that cater ads to your age and demographic.

For example, if a woman was to walk up to a mall directory, a camera inside would take a photo. It will recognize her gender, age and race and instantly provide an ad for the appropriate products. So, if the shopper is a 30-year-old woman, she might see adds for makeup, shoes and clothing.

Industry expert Rafe Needleman believes it’s just a matter of time before stores not only to recognize you, but track your spending habits. “When you walk into a store, it might know who you are just when you walk in and give you deals based on past purchases,” said Needleman.

But not everyone wants to be recognized.

And the Federal Trade Commission worries about the time when technology becomes so advanced that your social media profiles are scraped for information.

Retailers would then have a face, name and maybe much more.

“It’s not out of the question that 10 years from now we’ll walk down the street and people will be wearing camouflage so they’re not picked up by facial recognition trackers all over the place,” said Mark Eichorn of the FTC.

In fact, researchers with Carnegie Mellon University used facial recognition technology to identify college students who volunteered to be photographed for their study. By taking those photos and comparing them to photos found on social networking sites, such as Facebook, they were able to identify almost a third of them. That means they had profiles, ‘likes,’ interests and possibly family information.

Researchers took the study a step further and used other publicly available data to predict partial Social Security numbers. As for the technology in use now, retailers say they are not saving the photos or the information that is attached to the pictures. They say they’re simply using the information to serve you better. Banks are using it to identify customers and prevent fraud. Hotels are using it to know when honor program guests arrive.

This spring, bars in Gainesville will begin using cameras that will do more than just capture the faces of the people inside. The technology will also determine their gender and age. Using an app called SceneTap on their smartphone, potential patrons can use that data before deciding whether to go inside.

Bars in Orlando and Miami may begin using the software by the end of this year. source – Click Orlando