Magen David Adom (MDA) has declared a mass casualty event and the State of Israel has moved to its highest security alert nationwide as hospitals report that five are... 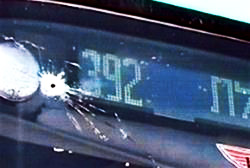 Magen David Adom (MDA) has declared a mass casualty event and the State of Israel has moved to its highest security alert nationwide as hospitals report that five are dead following terror attacks that struck the country’s southern region midday Thursday.

Authorities are calling for Israeli to donate blood at local MDA stations across the country. The area has been declared a closed military area and the IDF spokesman has asked people to keep away.

At Yoseftal Medical Center, 29 casualties were admitted with a range of injuries, including severe trauma. Seven of the most critically wounded were sent by medical helicopter to Soroka Medical Center in Be’er Sheva.

Two Egged buses and an IDF vehicle were targeted by unidentified terrorist cells in what appears to be a coordinated operation.

In the first attack, three terrorists ambushed bus # 392 about 30 kilometers from Eilat as it traveled on Route 12 from Be’er Sheva towards the city, opening fire with automatic weapons. Most of the passengers in the first bus were IDF soldiers heading to the Red Sea resort city on leave. The troops engaged the terrorists in a shootout, killing at least two of the three operatives and leaving a third critically injured.

Terrorists targeted a second Egged bus less than an hour later, firing a rocket-propelled grenade (RPG) at the vehicle and wounding more passengers just a few kilometers from Eilat. An IDF military vehicle was blown up as it raced to the scene, driving over an explosive device planted on the road. A number of soldiers were seriously wounded in the attack. source – Arutz Sheva