Forbes reports that at Starbucks’ annual meeting in Seattle on Wednesday a shareholder complained to the chief executive, Howard Schultz, that the company had lost customers because of its support for gay marriage. Last year Starbucks announced its support for Washington State’s referendum backing gay marriage, and in response the National Organization for Marriage launched a boycott of the coffee chain.

Starbucks CEO Howard Schultz has a message for Christians everywhere, and it’s a simple one. If you don’t like gay marriage, then sell your shares and get out. And he had no problem saying this as he addressed concerns by Christian employees at the annual shareholders meeting in Seattle.

Forbes reports that at Starbucks’ annual meeting in Seattle on Wednesday a shareholder complained to the chief executive, Howard Schultz, that the company had lost customers because of its support for gay marriage. Last year Starbucks announced its support for Washington State’s referendum backing gay marriage, and in response the National Organization for Marriage launched a boycott of the coffee chain. 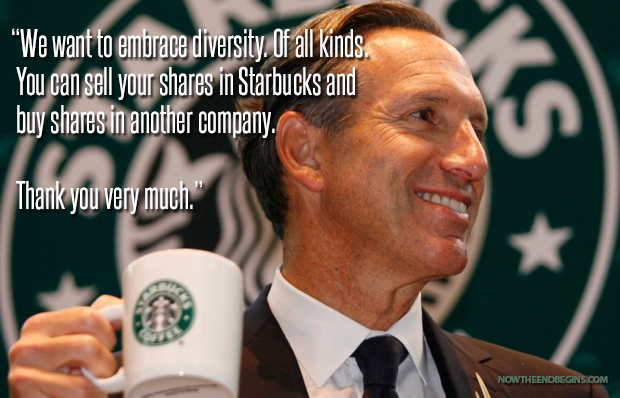 CLICK HERE TO WATCH THE VIDEO OF SCHULTZ’S REMARKS

“In the first full quarter after this boycott was announced, our sales and our earnings, shall we say politely, were a bit disappointing,” said the shareholder, Tom Strobhar, whom the Huffington Post identifies at the founder of the anti-gay marriage Corporate Morality Action Center.

Was Schultz taken aback? Not in the least. He responded, “Not every decision is an economic decision. Despite the fact that you recite statistics that are narrow in time, we did provide a 38% shareholder return over the last year. I don’t know how many things you invest in, but I would suspect not many things, companies, products, investments have returned 38% over the last 12 months. Having said that, it is not an economic decision to me. The lens in which we are making that decision is through the lens of our people. We employ over 200,000 people in this company, and we want to embrace diversity. Of all kinds.”

At that point the audience interrupted in cheers and applause. Then Schultz concluded, “If you feel, respectfully, that you can get a higher return than the 38% you got last year, it’s a free country. You can sell your shares in Starbucks and buy shares in another company. Thank you very much.” More cheers.