Coffee chain Starbucks has plenty of stores across the world, and plenty in Muslim nations. But one country where they proudly will not operate is in the nation of Israel. Starbucks closed all their stores over 11 years ago in the Holy Land, and today's announcement effectively reveals they are boycotting Israel. Wouldn't a steaming-hot cup of Dunkin Donuts coffee taste so wonderfully good right about now? 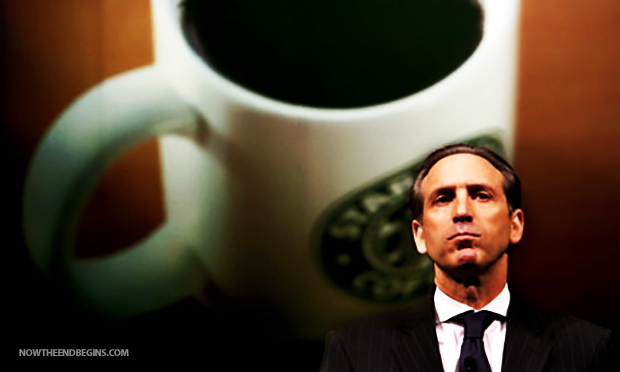 Starbucks wants nothing to do with Israel

“The LORD is righteous: he hath cut asunder the cords of the wicked. Let them all be confounded and turned back that hate Zion.” Psalm 129:4,5

Coffee chain Starbucks has plenty of stores across the world, and plenty in Muslim nations. But one country where they proudly will not operate is in the nation of Israel. Starbucks closed all their stores over 11 years ago in the Holy Land, and today’s announcement effectively reveals they are boycotting Israel.

The coffee chain has issued a statement announcing that neither Starbucks nor CEO Howard Schultz “provides financial support to Israel,” or to its army, in the wake of what Starbucks called “false rumors.”

The company, which is known for flooding markets with its stores, also pointed out that it closed all of its stores in Israel in 2003 because of “operational challenges.”

Spokesman Jim Olson wouldn’t specify what challenges the company faced in Israel, but did say the decision to leave “was not related to political issues.”

Is it true that Starbucks or Howard Schultz provides financial support to Israel?

No. This is absolutely untrue. Rumors that Starbucks or Howard provides financial support to the Israeli government and/or the Israeli Army are unequivocally false. Starbucks is a publicly held company and as such, is required to disclose any corporate giving each year through a proxy statement.

Has Starbucks ever sent any of its profits to the Israeli government and/or Israeli army?

No. This is absolutely untrue.

Is it true that Starbucks closed its stores in Israel for political reasons?

No. We do not make business decisions based on political issues. We decided to dissolve our partnership in Israel in 2003 due to the on-going operational challenges that we experienced in that market. After many months of discussion with our partner we came to this amicable decision. While this was a difficult decision for both companies, we believe it remains the right decision for our businesses.

Do you have plans to re-open should the opportunity arise?

We decided to dissolve our partnership in Israel in 2003 due to the on-going operational challenges that we experienced in that market.

When and where the business case makes sense and we see a fit for the Starbucks brand in a market we will work closely with a local partner to assess the feasibility of offering our brand to that community. We will therefore continue to assess all opportunities on this basis. At present, we will continue to grow our business in the Middle East as we have been very gratified by the strong reception of the brand in the region. We continue to work closely with our business partner, the Alshaya Group, in developing our plans for the region.

Do you work with a Middle East partner to operate Starbucks stores?

We are extremely fortunate and proud to have forged a successful partnership for the past fifteen years and look forward to building on this success.

In which Middle Eastern and North African countries do you operate?

We partner with Alshaya Group to operate Starbucks stores in Bahrain, Cyprus, Egypt, Jordan, Kuwait, Lebanon, Morocco, Oman, Qatar, Saudi Arabia, Turkey and United Arab Emirates in the Middle East and North Africa region. We are fortunate to have the opportunity to work with so many communities, and we are committed to providing the Starbucks Experience while respecting the local customs and cultures of each country we are a part of. We are also committed to hiring locally, providing jobs to thousands of local citizens in the countries where we operate.