Singularity is now. IBM has unveiled a new experimental computer chip that it says mimics the human brain in that it perceives, acts and even thinks. It terms the... 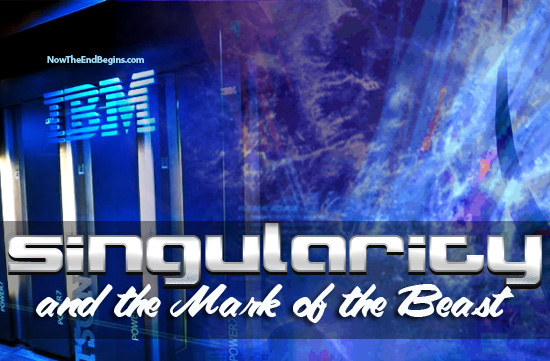 Singularity and The Image of the Beast

The concept of Singularity and its exact definition are somewhat elusive, but in simple terms it means that man and machines have become interchangeable. Thus, when the biological and technical have merged, then Singularity will have been achieved. It is a word that few have heard or understand, but mankind is now in a technological explosion that is directly leading to Singularity. The science fiction that started in the 1950s has slowly become a reality. Roby the robot and the machine that vastly increased Dr. Morbius’s intelligence are now coming into focus as reality. Singularity is no longer science fiction: it is reality.  source – John McTernan

IBM has unveiled a new experimental computer chip that it says mimics the human brain in that it perceives, acts and even thinks. It terms the machines built with these chips “cognitive computers”, claiming that they are able to learn through experience, find patterns, generate ideas and understand the outcomes.

In building this new generation of chip, IBM combined principles of nanoscience, neuroscience and supercomputing.

It has been awarded $21m (£12.7m) of new funding by the Defense Advanced Research Projects Agency (DARPA) for the next phase of the project, which it terms “Systems of Neuromorphic Adaptive Plastic Scalable Electronics” (SyNAPSE).

“This is a major initiative to move beyond the von Neumann paradigm that has been ruling computer architecture for more than half a century,” said Dharmendra Modha, project leader for IBM Research.

Modha added that the chip may see applications in business, science and government.

“Future applications of computing will increasingly demand functionality that is not efficiently delivered by the traditional architecture. “These chips are another significant step in the evolution of computers from calculators to learning systems, signalling the beginning of a new generation of computers and their applications in business, science and government.”

IBM states that the chips, while certainly not biological, are inspired by the architecture of the human brain in their design. Digital silicon circuits make up what it terms the “neurosynaptic core”.

The scientists have built two working prototype designs. Both cores contain 256 neurons, one with 262,144 programmable synapses and the other with 65,536 learning synapses. The team has successfully demonstrated simple applications like navigation, machine vision, pattern recognition, associative memory and classification. source – Computing UK