Two blind men can see again for the first time in more than two decades after an implant of a 3mm 'bionic eye' microchip. Doctors believe in time Chris... 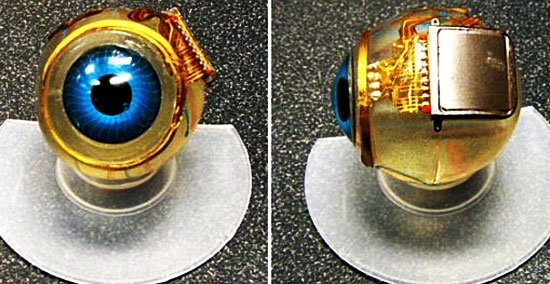 SINGULARITY: The chip is 3mm by 3mm, and is implanted into the eyeball of sufferers
by Geoffrey Grider May 3, 2012
NOW THE END BEGINS SHARE:

Two blind men can see again for the first time in more than two decades after an implant of a 3mm ‘bionic eye’ microchip. Doctors believe in time Chris James will be able to recognise faces, once his brain learns to see again.

SINGULARITY: The chip is 3mm by 3mm, and is implanted into the eyeball of sufferers

Chris, from Wiltshire, said: ‘I’ve always had that thought that one day I would be able to see again.’

Surgeons in Oxford, led by Professor Robert MacLaren, fitted the chip at the back of Chris’ eye in a complex eight-hour operation last month. Chris was one of two British patients to receive the electronic microchips – and both were regaining ‘useful vision’ just weeks after undergoing surgery.

Robin Millar, 60, from London, is one of the patients who has been fitted with the chip along with 1,500 electrodes, which are implanted below the retina. The music producer said: ‘Since switching on the device I am able to detect light and distinguish the outlines of certain objects which is an encouraging sign.

‘I have even dreamt in very vivid colour for the first time in 25 years so a part of my brain which had gone to sleep has woken up! ‘I feel this is incredibly promising for future research and I’m happy to be contributing to this legacy.’

Retina Implant AG, a leading developer of subretinal implants, fitted two RP sufferers with the wireless device in mid-April as part of its UK trial.

The patients were able to detect light immediately after the microchip was activated, while further testing revealed there were also able to locate white objects on a dark background, Retina Implant said. source – Daily Mail UK