The Shocking Missing Word That Laodicean False Teacher Joel Osteen Has Almost Never Tweeted Will Blow Your Mind, Or Maybe Not

Joel Osteen is the pastor of the largest church in America, Lakewood Church in Houston, Texas. His form and likeness appear on magazine covers at the supermarkets, on best-selling books, on board games, and on nearly every talk and interview show on television. He is very active on social media, especially on Twitter where he has logged over 12,000 tweets to over 3 million followers. But here was the biggest shocker of them all. The most visible and most popular Christian pastor in America only used the words "Jesus" and "Christ" 2 times each!

@JoelOsteen tweets “When you get up in the morning, declare that something good is going to happen.”

Joel Osteen is the pastor of the largest church in America, Lakewood Church in Houston, Texas. His form and likeness appear on magazine covers at the supermarkets, on best-selling books, on board games, and on nearly every talk and interview show on television. He is very active on social media, especially on Twitter where he has logged over 12,000 tweets to over 3 million followers.

“That at the name of Jesus every knee should bow, of things in heaven, and things in earth, and things under the earth; And that every tongue should confess that Jesus Christ is Lord, to the glory of God the Father.” Philippians 2:10,11 (KJV)

So just for fun tonight, I paid a visit to his Twitter account and read through every text for the past year. His most recent text was today, and his oldest, visible text was posted on November 25th, 2013. As I scrolled through his tweets, I made some shocking discoveries for the man referred to as “America’s Pastor”.

In the last year, Joel has tweeted roughly 806 times. He used the word God in a general sense 261 times, he never quoted the bible, and used the words “dream” or “dreams” as in achieving your dreams 66 times. Here is what searches for the following words turned up:

But here was the biggest shocker of them all. 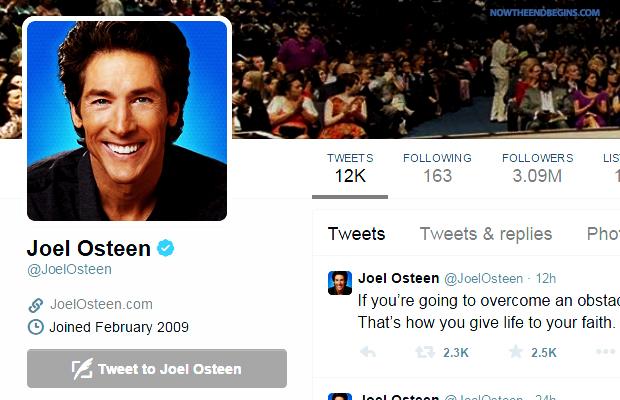 @VictoriaOsteen and I are going to see #SonofGod this weekend. We hope you go see this epic film on the life of Jesus.

Jesus didn’t come to start a religion. He came to have a relationship with you. He has a purpose and a destiny for your life.

Joel Osteen’s Twitter account contains no bible, no verses, no gospel, no salvation, and worst of all, no Jesus Christ. The 43,000 people who fill his stadium week should rise up with one voice and demand he begin to preach the death, burial and resurrection of Jesus Christ as the Apostle Paul commanded. And because I am positive that Joel could not, on a bet, find that gospel in the bible, NTEB is providing it here, free of charge, for him:

“Moreover, brethren, I declare unto you the gospel which I preached unto you, which also ye have received, and wherein ye stand; By which also ye are saved, if ye keep in memory what I preached unto you, unless ye have believed in vain. For I delivered unto you first of all that which I also received, how that Christ died for our sins according to the scriptures; And that he was buried, and that he rose again the third day according to the scriptures:” 1 Corinthians 15:1-4

Seriously, Joel, you should be ashamed…and you will be when you stand before Him whose Name you are so ashamed of. Jesus Christ.