"They are tremendously well funded. This is beyond anything we have seen," Hagel told reporters.... 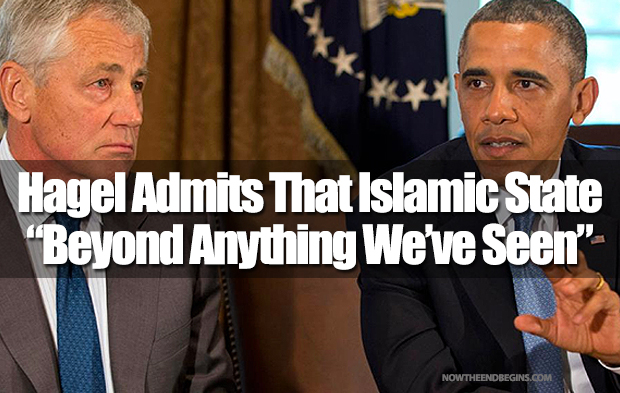 One impeachable offense after another for the community organizer

My, my, what a difference two years makes. During the 2012 Presidential Campaign, incumbent Barack Obama was asked about Al Qaeda and their resurgence in Iraq. Obama’s flippant answer floored just about every one that heard it.

Sleep well tonight, America. Obama’s JV Team has been promoted to Varsity, and seemingly unstoppable. Please forward all questions for the President to the golf course where he will be sure to get them, thank you.

This is what Obama said at that time:

“The analogy we use around here sometimes, and I think is accurate, is if a jayvee team puts on Lakers uniforms that doesn’t make them Kobe Bryant,” Obama told Remnick. “I think there is a distinction between the capacity and reach of a bin Laden and a network that is actively planning major terrorist plots against the homeland versus jihadists who are engaged in various local power struggles and disputes, often sectarian.”

Flash-forward to August 2014. ISIS, otherwise known as the Islamic State, has taken control of nearly all of Northern Iraq, and has tens of millions of dollars in funding, and state-of-the-art missiles and militia.

Apparently, this comes as a huge surprise to Team Obama, and in what we are sure was a regrettable moment of honesty, actually admitted that ISIS is beyond anything they were or are prepared to deal with. Hagel’s comments today:

US Defense Secretary Chuck Hagel warned Thursday that the Islamic State is more than a traditional “terrorist group” and better armed, trained and funded than any recent threat. “They marry ideology and a sophistication of strategic and tactical military prowess. They are tremendously well funded. This is beyond anything we have seen,” Hagel told reporters.

So sleep well tonight, America. Obama’s JV Team has been promoted to Varsity, and seemingly unstoppable. Please forward all questions for the President to the golf course where he will be sure to get them, thank you.