The federal government on Friday began sending hundreds of unaccompanied children caught crossing the border illegally in Texas to a holding center in Nogales, Ariz., further straining relations with... 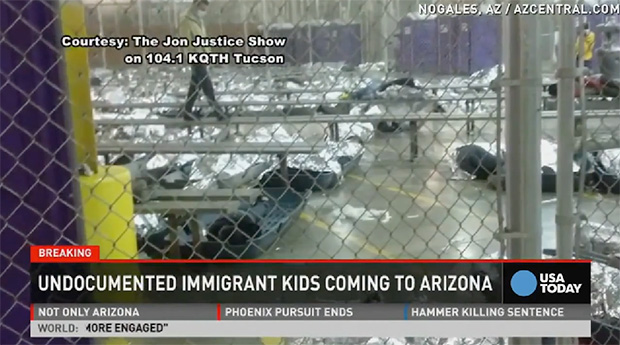 Obama refuses to answer critics for why he is doing this

The federal government on Friday began sending hundreds of unaccompanied children caught crossing the border illegally in Texas to a holding center in Nogales, Ariz., further straining relations with Gov. Jan Brewer, who was already angry over the recent release of hundreds of undocumented families at bus stations in Phoenix and Tucson.

Brewer said she learned Friday that 432 children were transported to a holding facility in Nogales and that an additional 732 children would be brought there today and Sunday.

“I am disturbed and outraged that President Obama’s administration continues to implement this dangerous and inhumane policy,” Brewer said in a written statement.

Brewer’s spokesman, Andrew Wilder, told the Associated Press that conditions at the holding facility in Nogales are so dire that the state is releasing federal medical and other supplies to the facility. A regional director of the Federal Emergency Management Agency was also being sent to Arizona to help manage the crisis, Wilder told the AP.

The Border Patrol has been overwhelmed by a surge of undocumented immigrants crossing the border illegally in the Rio Grande Valley of Texas, including nearly 50,000 children traveling on their own, the AP reported.

The federal government plans to use the facility in Nogales as a way station, where the children will be vaccinated and checked medically. They will then be flown to facilities being set up in Ventura, Calif., San Antonio and Fort Sill, Okla., the AP said.

Hundreds Of Illegal Alien Children In AZ Detention Center from Now The End Begins on Vimeo.

The transfer of hundreds of unaccompanied children from Texas to Arizona comes after the Department of Homeland Security began flying hundreds of undocumented families, mostly women and children, to Tucson over the Memorial Day weekend.

DHS officials said the families were shipped here because the Border Patrol did not have the manpower or detention space to process a surge in undocumented immigrants from Central America apprehended in Texas.

After being processed by the Border Patrol in Tucson, the DHS began releasing the families on humanitarian parole and dropping them off at Greyhound bus stations in Phoenix and Tucson with instructions to report to an ICE office once they reached their destinations in other cities.

The practice drew criticism from human-rights groups concerned about the migrants’ well-being. Dozens of volunteers began showing up at the bus stations to provide the families with water, food, medicine and other necessities after their release.

The release also prompted several Arizona Republicans, including Brewer and Sens. John McCain and Jeff Flake, to demand that Obama and the DHS explain why the migrants were being sent to Arizona and released.

Federal officials said Friday that no migrant families were scheduled to be flown to Arizona this weekend, but the transfers could resume in the future if the Border Patrol in Texas continues to be overwhelmed.

DHS officials also said Friday that the Border Patrol’s El Paso Sector is assisting with the processing of migrants apprehended in Texas and then turning them over to ICE to determine whether they will be held or released on a case-by-case basis.

In the past, undocumented immigrants from Central America have been held in detention facilities and then flown back to their countries. But the arrival of thousands of families and children traveling on their own created new challenges for the DHS because ICE has only one detention center for holding families, in Pennsylvania.

DHS officials noted that the migrants being released will be kept under supervision and are still subject to deportation.

Brewer said Friday that she is still waiting for the Obama administration to explain why migrants are being sent to Arizona. She also blamed the federal government for creating the crisis by releasing migrants and not doing enough to secure the border.

“Not only does the federal government have no plan to stop this disgraceful policy, it also has no plan to deal with the endless waves of illegal aliens once they are released here,” Brewer said in her statement. source – AZ Central