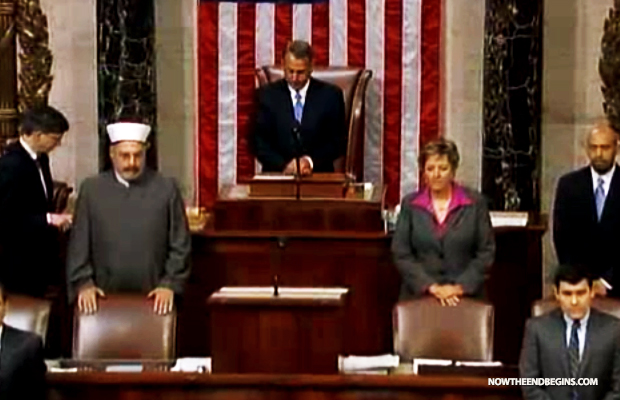 Islam slowly creeping into all three branches of our government

Years from now, when people look back on America, historians will write endless amounts of books and papers on the precise time when America gave into the relentless creeping Sharia and our democratic republic was destroyed. That time is now…right now. Historians will be very careful to note that our nation was not destroyed from outside forces, but was betrayed from forces within, namely our elected leaders.

On November 13, 2014, U.S. Rep. Rush Holt and House Leader John Boehner invited Imam Hamad Ahmad Chebli, religious leader of the Islamic Society of Central Jersey (ISCJ) in Monmouth Junction, to give the opening prayer in the House of Representatives.

The opening prayer asked for the “blessings” of Allah “the most merciful” to fall upon America. Boy, talk about inviting a curse! You could expect this nonsense if it was Harry Reid or Nancy Pelosi, but this was done by the hands of Republicans.

In 2015, the only difference between the two parties is how they spell their name, and whether they use the color red or blue on their logo. The so-called “Republican Landslide” from November 4th is a meaningless distinction that will amount to nothing to champion any Christian values or Conservative causes.

The Islamization of America, at the hands of our own leaders, proceeds at full speed.