An Israeli cabinet minister last week publicly stated that perhaps the time has come to rebuild the biblical Temple on Jerusalem's Temple Mount.... 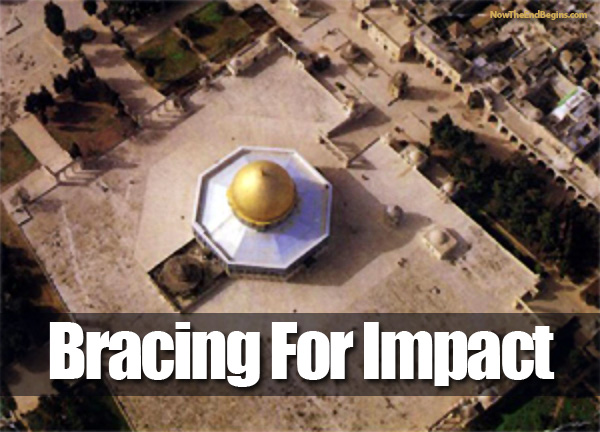 The prophet Daniel said that it will be the Antichrist who will sit on the throne of the rebuilt Third Temple
by Geoffrey Grider July 9, 2013
NOW THE END BEGINS SHARE:

“Seventy weeks are determined upon thy people and upon thy holy city, to finish the transgression, and to make an end of sins, and to make reconciliation for iniquity, and to bring in everlasting righteousness, and to seal up the vision and prophecy, and to anoint the most Holy.

Know therefore and understand, that from the going forth of the commandment to restore and to build Jerusalem unto the Messiah the Prince shall be seven weeks, and threescore and two weeks: the street shall be built again, and the wall, even in troublous times.

And after threescore and two weeks shall Messiah be cut off, but not for himself: and the people of the prince that shall come shall destroy the city and the sanctuary; and the end thereof [shall be] with a flood, and unto the end of the war desolations are determined.

And he shall confirm the covenant with many for one week: and in the midst of the week he shall cause the sacrifice and the oblation to cease, and for the overspreading of abominations he shall make it desolate, even until the consummation, and that determined shall be poured upon the desolate.” Daniel 9: 24-27

From Israel Today: An Israeli cabinet minister last week publicly stated that perhaps the time has come to rebuild the biblical Temple on Jerusalem’s Temple Mount.

Most Israelis has no aspirations of rebuilding the Temple. Even among those who would like to see the Temple restored, most do not believe Israel can undertake something so controversial absent a direct act of God.

But that didn’t stop Housing and Construction Minister Uri Ariel (Jewish Home) from stating that “we need to build a real Temple on the Temple Mount.”

Ariel was speaking at a press event in the Samarian community of Shilo, where archaeologists have uncovered remains of the biblical Tabernacle that was located there for hundreds of years before King David’s conquest of Jerusalem. source – Israel Today