Have The Seeds Of WWIII Already Sprouted In Russia-Ukraine Standoff?

Deep in the flat and featureless landscape of eastern Ukraine, it is all too ­possible that the outline of World War III is taking shape. Whipped up by the... 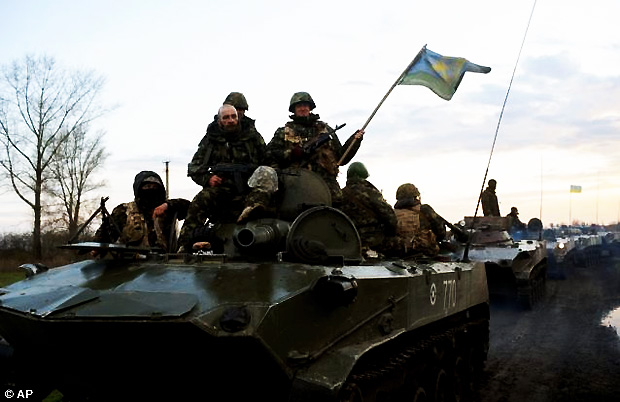 A Ukrainian military convoy traveling towards the eastern Ukrainian town of Slovyansk where Russian nationalists have seized the regional administration building
by Geoffrey Grider April 16, 2014
NOW THE END BEGINS SHARE:

Vladimir Putin is striking at the heart of the West

Ukraine: Deep in the flat and featureless landscape of eastern Ukraine, it is all too ­possible that the outline of World War III is taking shape. Whipped up by the Kremlin ­propaganda machine and led by Russian ­military intelligence, armed men are erecting road blocks, storming police stations and ripping down the country’s flag.

They are demolishing not just their own country — bankrupt, ill-run and beleaguered — but also the post-war order that has kept most of Europe and us, here in Britain, safe and free for decades.

His target is our inability to work with allies in defense against common threats. The profoundly depressing fact is that the events of the past few months, as Russia has annexed the Crimea and ­suppressed opposition in Ukraine, have shown the West to be divided, humiliated and powerless in the face of these land grabs.

We are soon to face a bleak choice. We can chose to surrender any responsibility we have to protect Ukraine and the Baltic states — almost certainly Putin’s next target — from further Russian incursion. Or we can mount a last-ditch attempt to deter Russia from furthering its imperial ambitions.

If we do choose to resist Putin, we will risk a terrifying military escalation, which I do not think it an exaggeration to say could bring us to the brink of nuclear war.

Putin knows that. And he believes we will choose surrender. For the real story of recent events in Ukraine is not about whether that country has a free-trade deal with Brussels or gets its gas from Moscow.

It is about brute power. It is about whether Putin’s Russia — a rogue state on Europe’s doorstep — can hold its neighbors to ­ransom, and whether we have the will to resist him. So far the answer to the first question is yes. And to the second a bleak no.

The Russian leader believes the collapse of the Soviet Union was a ‘geopolitical catastrophe’. He believes Russia was stripped of its empire by the West’s chicanery. And quite simply, he wants it back.

Putin has presented the Ukrainian leaders with an impossible choice. Either they consent to the dismemberment of their country. Or they fight a war they cannot win.  Ukraine’s ill-trained, ill-equipped and ill-led soldiers are quite unsuited to deal with the fraught challenge facing them.

Any bloodshed against a single Russian soldier will give Putin a pretext to use his military might. For her part, Russia has played a brutally clever game. She has ­deliberately sought to humiliate and destabilise Ukraine.

Now Putin can claim his soldiers must be allowed to intervene because the very social disorder his  outriders have engineered demonstrates that the authorities cannot maintain order. Having taken Ukraine, he will turn his attention to the Baltic states. Members of the EU and NATO, their lawful societies, elections and ­thriving economies are an implicit rebuke to those who preside over sleaze and brutality in Russia.

Now Putin sees a chance to humiliate them — and the West. He does not need to invade, just to provoke. Using social division and agitation he will raise the pressure — whether economic or political — on one or more of the Baltic states until it becomes unbearable.

NATO and the EU — on current form — will merely appeal for ­dialogue and threaten sanctions. ­But nothing will happen. Which means the Baltics will buckle, and Putin will take back lands which he believes are rightly Russia’s.

That will be the end of NATO — and the dawn of a terrifying new world in which international rules count for nothing and the strong dominate the weak. Russia — ruthless and greedy — can play divide and rule for decades to come. source – Daily Mail UK