SEE IT: Iranian Animated Video Showing An Islamic Invasion of Jerusalem In Israel

The clip then transitions to a black screen with Persian script that says “Israel must be obliterated,” or literally, “erased from the annals of history,” a command first issued... 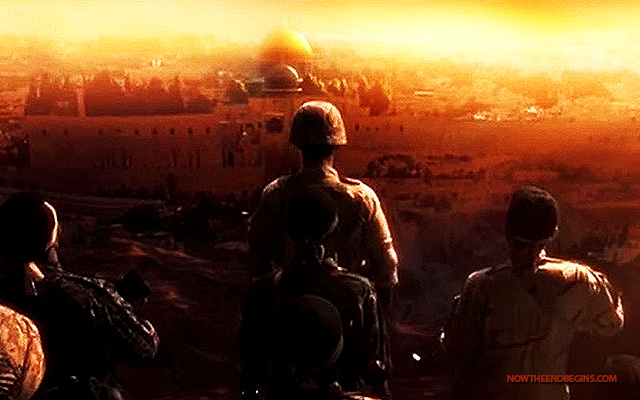 One dons the IRGC insignia on his left arm, another the emblem of the Iran-backed Iraqi Shia Badr Organization. Yet a third dons a headband bearing the Lebanese Hezbollah logo, and a fourth is seen clad in Hamas’ characteristic balaclava and the Qassam Brigades green headband. Each brandishes a weapon, a helmet and a keffiyeh. They are shown poised on a hill overlooking the Israeli capital of Jerusalem, prepared for battle.

The clip then transitions to a black screen with Persian script that says “Israel must be obliterated,” or literally, “erased from the annals of history,” a command first issued by Iran’s late Ayatollah Khomeini and famously repeated by former Iranian president Mahmoud Ahmadinejad, as well as leaders of Iran’s proxies such as Hezbollah leader Hassan Nasrallah.

The video continues, “and the youth will definitely see that day when it comes.” The soldiers are then seen marching to battle towards Jerusalem’s Temple Mount and Old City. Their depiction isn’t exactly as the Bible has foretold it, but it’s fairly close. The one big missing player is Turkey.

We here at NTEB have been telling you for years now about the coming invasion of Jerusalem as prophesied in the Bible. The Bible says it will happen in the days after the Rapture of the Church, during the time of Jacob’s trouble. Listen to what the Spirit has to say about it:

“For, lo, the days come, saith the LORD, that I will bring again the captivity of my people Israel and Judah, saith the LORD: and I will cause them to return to the land that I gave to their fathers, and they shall possess it. And these are the words that the LORD spake concerning Israel and concerning Judah. For thus saith the LORD; We have heard a voice of trembling, of fear, and not of peace. Ask ye now, and see whether a man doth travail with child? wherefore do I see every man with his hands on his loins, as a woman in travail, and all faces are turned into paleness? Alas! for that day is great, so that none is like it: it is even the time of Jacob’s trouble; but he shall be saved out of it.” Jeremiah 30:3-7 (KJV)

In the New Testament, Jesus explains the same thing to His disciples in Matthew 24:

“When ye therefore shall see the abomination of desolation, spoken of by Daniel the prophet, stand in the holy place, (whoso readeth, let him understand:) Then let them which be in Judaea flee into the mountains: Let him which is on the housetop not come down to take any thing out of his house: Neither let him which is in the field return back to take his clothes. And woe unto them that are with child, and to them that give suck in those days! But pray ye that your flight be not in the winter, neither on the sabbath day: For then shall be great tribulation, such as was not since the beginning of the world to this time, no, nor ever shall be. And except those days should be shortened, there should no flesh be saved: but for the elect’s sake those days shall be shortened.” Matthew 24:15-22 (KJV)

The day is coming when Israel will indeed be surrounded by Russia, Iran, Turkey, Germany and all the others mentioned in Ezekiel 38 and 39. The powers of darkness will indeed rise and fulfill prophecy. Jews will be driven out of the Israel and they will flee to the Red Rock City of Selah, Petra.

But the victory will come when the Lord Jesus Christ returns on horseback with His Army, the Church to save His people the Jews. Revelation 19 describes it this way:

“And I saw heaven opened, and behold a white horse; and he that sat upon him was called Faithful and True, and in righteousness he doth judge and make war. His eyes were as a flame of fire, and on his head were many crowns; and he had a name written, that no man knew, but he himself. And he was clothed with a vesture dipped in blood: and his name is called The Word of God. And the armies which were in heaven followed him upon white horses, clothed in fine linen, white and clean. And out of his mouth goeth a sharp sword, that with it he should smite the nations: and he shall rule them with a rod of iron: and he treadeth the winepress of the fierceness and wrath of Almighty God. And he hath on his vesture and on his thigh a name written, KING OF KINGS, AND LORD OF LORDS.” Revelation 19:11-16 (KJV)

Until then, however, things will only get worse. Much, much worse. If you would like to miss the Great Tribulation, click here to find out how…