Watch as Obama, America's Commander-in-chief, shows nothing but contempt and disrespect for not only the office that he holds, but for the troops that he commands as well.... 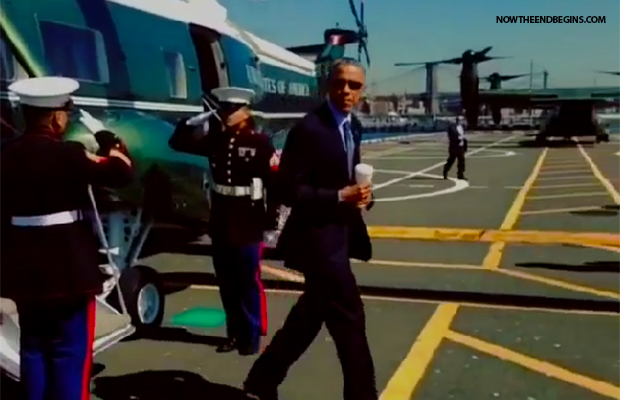 “Better is a poor and a wise child than an old and foolish king, who will no more be admonished.” Ecclesiastes 4:13

Actually, we are at a loss for words on this one. Watch as Obama, America’s Commander-in-chief, shows nothing but contempt and disrespect for not only the office that he holds, but for the troops that he commands as well. See him as he sneers, looks down at the ground, never removing his Chicago “thug life” sunglasses as he contemptuously fires off a forced salute of the Marines who are there to guard his life.

So there should be no wondering why Obama’s presidency is not respected, how could it be? With every move he makes and with every word that comes out of his mouth we hear his “message” loud and clear. He hates America.

He never even put down the coffee cup.