The seeds of Judean date palms turn out to have remarkable longevity. A team led by Sarah Sallon, which planted these six trees, first tried in 2005 to germinate a 2,000-year-old seed from the ancient fortress of Masada. To the surprise and delight of Sallon and her colleagues, it sprouted, and they named that first date-palm tree Methuselah, who in the Bible lived to the age of 969.

A team led by Sarah Sallon, which planted these six trees, first tried in 2005 to germinate a 2,000-year-old seed from the ancient fortress of Masada. To the surprise and delight of Sallon and her colleagues, it sprouted, and they named that first date palm tree Methuselah, who in the Bible lived to the age of 969.

At an astonishing rate, Israel is becoming reconnected with it’s storied biblical past, specifically the part on the timeline having to do when the Jews were under Roman occupation. We strongly recommend you take a quick trip to the NTEB Biblical Archaeology Archive to refresh your memory of just how much has been uncovered in recent years. Stories like this one today help to confirm my feelings that God is allowing these incredible finds in Israel’s past because future prophecy is getting ready to be fulfilled.

“The righteous shall flourish like the palm tree: he shall grow like a cedar in Lebanon. Those that be planted in the house of the LORD shall flourish in the courts of our God. They shall still bring forth fruit in old age; they shall be fat and flourishing;  To shew that the LORD is upright: he is my rock, and there is no unrighteousness in him.” Psalm 92:12-15 (KJB)

The fact that these 2,000 year old date palm seeds have been spouted is incredible, and even more so the fact that they have given the date palm seeds names from the Bible. They named the first one to sprout Methuselah, which put you right at the beginning of the days of Noah from Genesis. But I’m sure all that is just a coincidence. 🤔 Right?

After 2,000 Years, These Date Palm Tree Seeds Have Finally Sprouted And It’s Amazing

FROM THE ATLANTIC: “I was so not expecting it,” says Sallon, a doctor at Hadassah Medical Center who got interested in date palms as medicinal plants. At the time, the team didn’t even think to take basic measurements, such as seed weight or size, for comparison with modern date seeds. So after the success of Methuselah, they decided to try again, but more systematically. After all, was Methuselah a fluke, or were lots of date seeds viable after 2,000 years?

An archaeologist at the Hebrew University of Jerusalem allowed Sallon to sift through dusty boxes of plant material recovered from some of Israel’s most famous archaeological sites. She found plenty of seeds for her purpose. “They were in all various stages of disintegration,” Sallon says. “But some were in beautiful condition.” She picked 32 of the best-preserved seeds, and her collaborator Elaine Solowey planted them at a kibbutz in southern Israel. Solowey soaked the seeds in water and applied commercial plant hormones and fertilizer, but the protocol for planting them was essentially no different than for modern seeds. 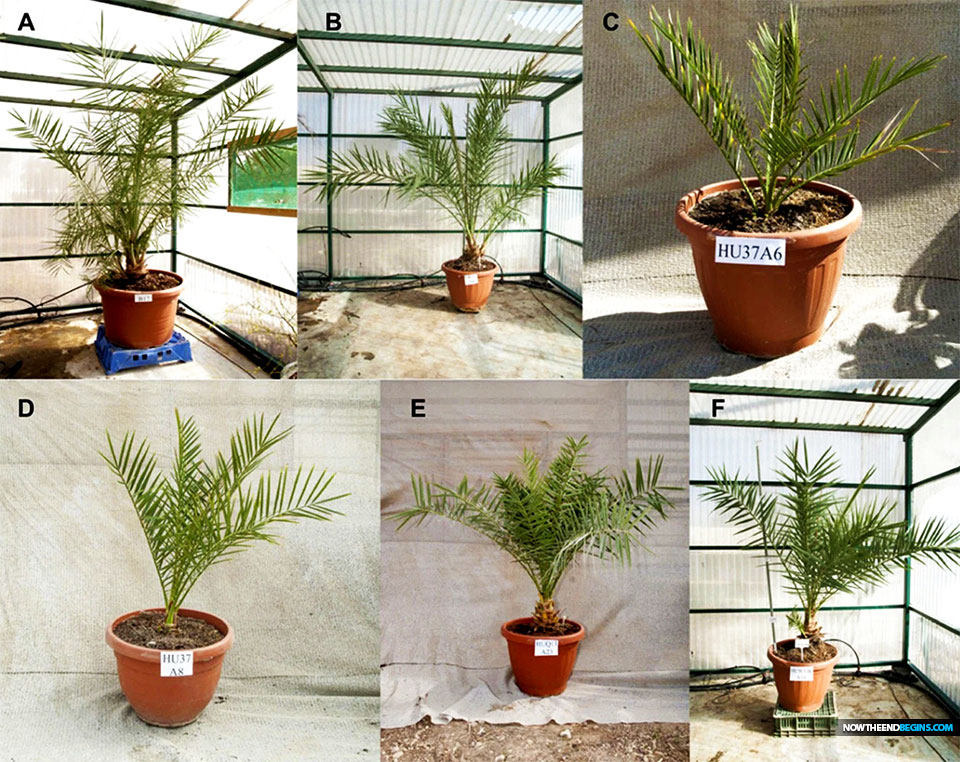 Five of the six date palm seeds that ultimately sprouted came from either Masada, the site of a famous siege in 74 AD that is said to have ended with the mass suicide of Masada’s defenders, or the Qumran Caves, best known as the site of the Dead Sea Scrolls. (A sixth came from caves at Wadi Makukh.) At 2,000 years old, the seeds are in fact contemporaries of these ancient events. Around the time Romans were laying siege to Masada and the Dead Sea Scrolls were being written, these seeds were being formed.

“It’s quite remarkable this team of researchers managed to germinate seeds of that age,” says Oscar Alejandro Pérez-Escobar, who studies ancient dates at the Royal Botanic Gardens, Kew. The fact that the team has done it not just once but now seven times suggests that ancient seeds could be used to resurrect genes that disappeared after thousands of years of breeding. “These ancient seeds might represent lost genetic diversity we don’t see any more,” Pérez-Escobar says. As date-palm growers adapt to climate change and battle pests and diseases, they might want to tap into the pool of ancient genes hidden in archaeological archives.

Why date palm seeds can remain viable for so long, no one is quite sure. The seeds are physically tough and, because they are adapted to the desert, especially tolerant of drying out. But Sallon also points to the environment where they were found, near the Dead Sea. The Dead Sea is the lowest place on Earth’s land. That means it has an especially thick layer of atmosphere to protect from cosmic radiation that could damage the seeds.

To understand how Adam, Jonah, Uriel, Boaz, Judith, and Hannah are related to more modern date palms, the team also analyzed genetic markers from the seedlings. The seedlings were genetically quite different from one another. Methuselah and Adam were most closely related to eastern varieties now found in the Arabian Gulf; Hannah and Judith to modern Iraqi varieties; and Uriel, Boaz, and Jonah to modern Moroccan varieties. The ancient seeds were also bigger and heavier than modern varieties.

Sallon helped name the seedlings. After Methuselah, she decided to continue with the biblical theme. Adam sprouted in the fall, around Rosh Hashanah, the Jewish new year, which celebrates the creation of the world and of Adam and Eve. She originally named the tree Eve, but switched to Adam after genetic markers revealed that it was a male tree. Judith came up a few months later, around Hanukkah, and was originally named Judah for the hero of the Hanukkah story, Judah Maccabee. Two more seedlings germinated around the spring harvest festival of Shavuot, when the Book of Ruth is traditionally read. So Sallon named those trees after Ruth and Boaz, Ruth’s second husband—until genetic analysis revealed that Ruth was also male. So Sallon changed the name to Uriel, after, this time, her own son.

Methuselah is now mature enough to produce pollen, and he’s actually become a father. Solowey used him to pollinate a modern female, and they made dates. The two female date palms from ancient seeds, Judith and Hannah, have not yet reached sexual maturity, so no ancient date fruits have been resurrected yet. READ MORE