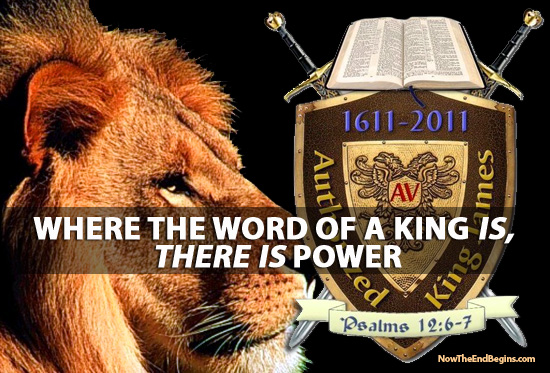 The never-ending attack on God’s word

At first glance, a story about a dedicated group of biblical scholars working over many decades for biblical accuracy sounds like a good thing. But when you read the actual details of the precise type of ‘scholarship’ they are employing, you see very quickly that this amounts to nothing more or less than an attack on the presevered word of God. Why is this? This is because not all bible texts, however ancient, have the confirming annointing of the Holy Spirit on them. Some of the manuscripts used, like the texts that have come out of Egypt and Rome, are corrupt and have been rejected by bible believers throughout time. We explain this in detail after you read this except from the headline story.

JERUSALEM — A dull-looking chart projected on the wall of a university office in Jerusalem displayed a revelation that would startle many readers of the Old Testament: The sacred text that people revered in the past was not the same one we study today. 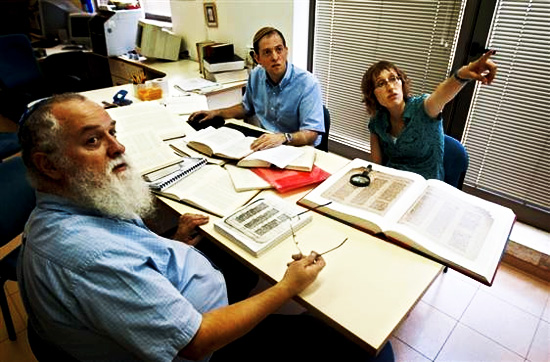 Dr. Michael Segal, editor for the Hebrew University Bible Project, center, Dr. Rafael Zer, editorial coordinator, left, and Efrat Leibowitz, graduate research assistant, confer in their office at the Hebrew University in Jerusalem on Wednesday. The ongoing work of these academic detectives shows that this foundation text of Western civilization has always been more fluid than many people’s strongly held beliefs would suggest.

An ancient version of one book has an extra phrase. Another appears to have been revised to retroactively insert a prophecy after the events happened. Scholars in this out-of-the-way corner of the Hebrew University campus have been quietly at work for 53 years on one of the most ambitious projects attempted in biblical studies — publishing the authoritative edition of the Old Testament, also known as the Hebrew Bible, and tracking every single evolution of the text over centuries and millennia.

Bible Project scholars have spent years combing through manuscripts such as the Dead Sea Scrolls, Greek translations on papyrus from Egypt, a printed Bible from 1525 Venice, parchment books in handwritten Hebrew, the Samaritan Torah, and scrolls in Aramaic and Latin. The last member of the original team died last year at age 90.” source – MNSBC

As  you can see in the underlined portion above, the Bible Project scholars are using texts that have been proven to be corrupt. You will also note that the Textus Receptus is not mentioned in their list of ancient manuscripts. That should be your first clue right there. But Hebrew bible scholars are not the only ones to have fallen victim to this trap of the Devil who hates the Authority of God’s inspired and preserved word. Nearly ALL of the modern version used by Christians have also been taken from the corrupt texts as well. Now, let’s take a look at the difference between Satan’s counterfeit, and the true word of God. NTEB stands on the King James Authorized Version 1611 Holy Bible as the antidote to the corrupt texts, and will now show you why we believe these things

When someone “corrects” the King James Bible with “more authoritative manuscripts” or “older manuscripts,” or “the best authorities,” they’re usually making some reference to Sinaiticus or Vaticanus. These are two very corrupt fourth century uncials that are practically worshipped by modern scholars. These are the primary manuscripts that Westcott and Hort relied so heavily on when constructing their Greek text (1851-1871) on which the new versions are based.

Vaticanus (B) is the most worshipped. This manuscript was officially catalogued in the Vatican library in 1475, and is still property of the Vatican today. Siniaticus (Aleph) was discovered in a trash can at St. Catherine’s Monastery on Mt. Sinai by Count Tischendorf, a German scholar, in the year 1844. Both B and Aleph are Roman Catholic manuscripts. Remember that! You might also familiarize yourself with the following facts:

1. Both manuscripts contain the Apocrypha as part of the Old Testament.

2. Tischendorf, who had seen both manuscripts, believed they were written by the same man, possibly Eusebius of Caesarea (260-340 A.D.).

3. Vaticanus was available to the King James translators, but God gave them sense enough to ignore it.

6. It is believed that Siniaticus has been altered by as many as ten different men. Consequently, it is a very sloppy piece of work (which is probably the reason for it being in a trash can). Many transcript errors, such as missing words and repeated sentences are found throughout it.

7. The Dutch scholar, Erasmus (1469-1536), who produced the world’s first printed Greek New Testament, rejected the readings of Vaticanus and Siniaticus.

8. Vaticanus and Siniaticus not only disagree with the Majority Text from which the KJV came, they also differ from each other. In the four Gospels alone, they differ over 3,000 times!

9. When someone says that B and Aleph are the oldest available manuscripts, they are lying. There are many Syriac and Latin translations from as far back as the SECOND CENTURY that agree with the King James readings. For instance, the Pashitta (145 A.D.), and the Old Syriac (400 A.D.) both contain strong support for the King James readings. There are about fifty extant copies of the Old Latin from about 157 A.D., which is over two hundred years before Jerome was conveniently chosen by Rome to “revise” it. Then Ulfilas produced a Gothic version for Europe in A.D. 330. The Armenian Bible, which agrees with the King James, has over 1,200 extant copies and was translated by Mesrob around the year 400. Sinaiticus and Vaticanus are clearly NOT the oldest and best manuscripts. source – AV 1611

But the attack by no means stops there, in the late 1800’s two men rose up and created the Greek texts that are the basis of all corrupt modern versions. Meet Westcott and Hort

Brooke Foss Westcott (1825-1901) and Fenton John Anthony Hort (1828-1892) were the two English “scholars” who produced the corrupt Greek text of the modern versions. Their dominating influence on the revision committee of 1871-1881 accounts for most of the corruption that we have today in modern translations. The Bible believer should keep several points in mind when discussing these two men. The following information is well documented in Final Authority, by William Grady, and in Riplinger’s New Age Bible Versions:

2. Westcott was a firm believer in Mary worship, and Hort claimed that Mary worship had a lot in common with Jesus worship.

4. Hort believed in baptismal regeneration as taught in the Catholic church.

5. Hort rejected the infallibility of Scripture.

6. Hort took great interest in the works of Charles Darwin, while both he and Westcott rejected the literal account of Creation.

7. Westcott did not believe in the Second Coming of Christ, the Millennium, or a literal Heaven.

8. Both men rejected the doctrine of a literal Hell, and they supported prayers for the dead in purgatory.

9. Hort refused to believe in the Trinity.

10. Hort refused to believe in angels.

11. Westcott confessed that he was a communist by nature.

12. Hort confessed that he hated democracy in all it’s forms.

13. Westcott also did his share of beer drinking. In fact, only twelve years after the Revised Version was published, Westcott was a spokesman for a brewery.

14. While working on their Greek text (1851-1871), and while working on the Revision Committee for the Revised Version (1871-1881), Westcott and Hort were also keeping company with “seducing spirits and doctrines of devils” (I Tim. 4:1). Both men took great interest in occult practices and clubs. They started the Hermes Club in 1845, the Ghostly Guild in 1851, and Hort joined a secret club called The Apostles in the same year. They also started the Eranus Club in 1872. These were spiritualists groups which believed in such unscriptural practices as communicating with the dead(necromancy).

15. The Westcott and Hort Greek text was SECRETLY given to the Revision Committee.

16. The members of the Revision Committee of 1881 were sworn to a pledge of secrecy in regard to the new Greek text being used, and they met in silence for ten years.

17. The corrupt Greek text of Westcott and Hort was not released to the public until just five days before the debut of the Revised Version. This prevented Bible-believing scholars like Dean Burgon from reviewing it and exposing it for the piece of trash that it was. source – AV 1611 QUESTION: Does this sound like an HONEST work of God or a DISHONEST work of the Devil?

God has preserved His word for us unto this day

2. It has no copyright. The textof the KJV may be reproduced by anyone for there is no copyright forbidding it’s duplication. This is not true with the modern perversions.

3. The KJV produces good fruit (Mat. 7:17-20). No modern translation can compare to the KJV when it comes to producing good fruit. For nearly four hundred years, God has used the preaching and teaching of the KJV to bring hundreds of millions to Christ. Laodicean Christians might favor the new versions, but the Holy Spirit doesn’t.

4. The KJV was translated during the Philadelphia church period (Rev. 3:7-13). The modern versions begin to appear rather late on the scene as the lukewarm Laodicean period gets underway (Rev. 3:14-22), but the KJV was produced way back in 1611, just in time for the many great revivals (1700-1900). The Philadelphia church was the only church that did not receive a rebuke from the Lord Jesus Christ, and it was the only church that “kept” God’s word (Rev. 3:8).

5. The KJV translators were honest in their work. When the translators had to add certain words, largely due to idiom changes, they placed the added words in italics so we’d know the difference. This is not the case with many new translations.

7. The KJV translators believed they were handling the very words of God (I Ths. 2:13). Just read the King James Dedicatory and compare it to the prefaces in the modern versions. Immediately, you will see a world of difference in the approach and attitude of the translators. Which group would YOU pick for translating a book?

8. The KJV is supported by far more evidence. Of over 5,300 pieces of manuscript evidence, ninety-five percent supports the King James Bible! The changes in the new versions are based on the remaining five percent of manuscripts, most of which are from Alexandria, Egypt. (There are only two lines of Bibles: the Devil’s line from Alexandria, and the Lord’s line from Antioch. We’ll deal with this later.)

9. No one has ever proven that the KJV is not God’s word. The 1611 should be considered innocent until proven guilty with a significant amount of genuine manuscript evidence.

Beware of people who claim to correct the word of God

God has indeed preserved His word, but as we have clearly shown you, all versions are not the same, and not all verisons have the seal of the Holy Spirit on them. Why is this so important? Because God takes His word so seriously, that He pronounces a curse on all those who would seek to corrupt it –

“For I testify unto every man that heareth the words of the prophecy of this book, If any man shall add unto these things, God shall add unto him the plagues that are written in this book:  And if any man shall take away from the words of the book of this prophecy, God shall take away his part out of the book of life, and out of the holy city, and [from] the things which are written in this book. ” Revelation 22

Don’t take our word for it, be a Berean and see if these things we tell you are so.