Did The Russian-Ukraine War Just Start?

'Up to five' militants in the separatist-controlled east-Ukrainian town of Slaviansk have been killed by government special forces - an operation that Russian president Putin said would lead to... 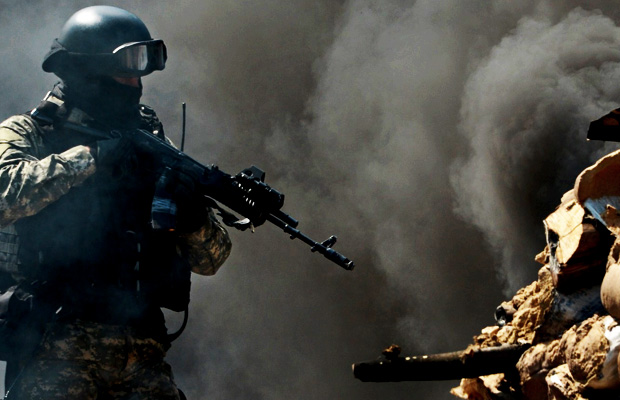 Death toll: Five rebels were killed during the assault and one government soldier
by Geoffrey Grider April 24, 2014
NOW THE END BEGINS SHARE:

Slaviansk, Ukraine – ‘Up to five’ militants in the separatist-controlled east-Ukrainian town of Slaviansk have been killed by government special forces – an operation that Russian president Putin said would lead to ‘consequences’ for Kiev.

Death toll: Five rebels were killed during the assault and one government soldier

A ministry statement said that during an ‘anti-terrorist operation’ its forces, supported by the army, removed three illegal checkpoints manned by armed groups in the northeastern part of the city.

‘During the armed clash up to five terrorists were eliminated,’ it said. One person had been wounded on the side of government forces, it added.

He added: ‘If these people have advanced to the so called “acute phase” (of confrontation with protesters), this is not an acute phase, it is just a punitive operation and it will of course incur consequences for the people making these decisions, including (an effect) on our interstate relations.’

Armored vehicles and a helicopter were used in the assault, with several personnel carriers driving past an abandoned rebel roadblock in flames to take up position at the entry to the town.

Reuters journalists saw a Ukrainian detachment with five armored personnel carriers take over a checkpoint on a road north of the city in late morning after it was abandoned by separatists who set tires alight to cover their retreat.