NATO leaders launched Sunday the first phase of a US-led missile shield for Europe, risking the wrath of Russia which has threatened to deploy rockets to EU borders in... 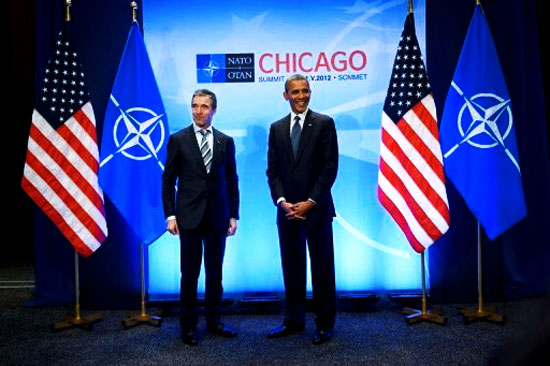 US President Barack Obama (R) meets with NATO Secretary General Anders Fogh Rasmussen during the NATO Summit in Chicago. NATO leaders are set to activate the first phase of a US-led missile shield for Europe on Sunday, risking the wrath of Russia which has threatened to deploy rockets to EU borders in response. (AFP Photo/Mandel Ngan)
by Geoffrey Grider May 21, 2012
SHARE THIS IMPORTANT NTEB ARTICLE:

NATO leaders launched Sunday the first phase of a US-led missile shield for Europe, risking the wrath of Russia which has threatened to deploy rockets to EU borders in response.

A NATO official told AFP that US President Barack Obama and his allies “just decided” at a Chicago summit to put a US warship armed with interceptors in the Mediterranean and a Turkey-based radar system under NATO command in a German base.

US President Barack Obama (R) meets with NATO Secretary General Anders Fogh Rasmussen during the NATO Summit in Chicago. NATO leaders are set to activate the first phase of a US-led missile shield for Europe on Sunday, risking the wrath of Russia which has threatened to deploy rockets to EU borders in response. (AFP Photo/Mandel Ngan)

The alliance insists the shield is not aimed at Russia and aims to knock out missiles that could be launched by enemies such as Iran, but Moscow fears that the system will also serve to neutralize its nuclear deterrent.

“Missile defense is indispensable. We are faced with real missile threats,” NATO Secretary General Anders Fogh Rasmussen said on the eve of the summit, adding that 30 states either have or seek ballistic missile technology.

“Against a real threat we need a real defense,” he said. The standoff has tested Russian-US relations for much of the past decade and been one of the primary issues addressed by Obama when he launched a diplomatic “reset” with Moscow in 2009.

Russian military chief General Nikolai Makarov said this month one option was for Russia to station short-range Iskander missiles in its Kaliningrad exclave near Poland, a long-running threat that has alarmed Eastern European states.

NATO had hoped that Russian President Vladimir Putin would come to Chicago, but instead he sent a lower level delegation to represent Moscow during the summit’s discussion on Afghanistan.

Putin, who returned to power after succeeding his protege Dmitry Medvedev this month, was often at odds with the previous US administration over missile defense in his first two terms of office.

“Russia is sensitive about its nuclear capability because that’s what makes it a superpower,” said Nick Witney, a London-based defense expert at the European Council on Foreign Relations.

In a bid to appease its former Cold War foe, the Western military alliance invited Russia to cooperate in the system at the last summit in November 2010 in Lisbon, but the two sides have struggled to find common ground.

“This is not a project targeted against Russia, but a project we want to push forward with Russia in the interest of Europe’s security,” said German Foreign Minister Guido Westerwelle. “And therefore the door for Russia will stay open.”

Moscow has called for joint control over the system and for NATO to sign a legally-binding guarantee that it is not aimed at Russia.

But NATO has balked at both demands, insisting on keeping two separate systems and refusing to sign a legally-binding document.

The US election also appears to have affected the pace of negotiations.

An open microphone famously caught Obama telling then president Medvedev in March that he could negotiate some concessions on the system if Russia gave him “space” until after the election this year.

The system will be deployed in four phases and become fully operational by 2018.

Spain will host four US Aegis ships at its port in Rota while Poland and Romania have agreed to host US land-based SM-3 missiles in the coming years.

The United States has tested missile defense technology for years but analysts have raised questions over whether the shield is a full-proof defense against incoming rockets from rogue states.

“They have scored successes (in tests) but it’s easier to hit things when you know something is about to come than when something is coming out of the blue,” Witney said.

“There is a huge number of technical unknowns on both sides of this equation,” Witney said, pointing out that there are also doubts over whether Iranian missiles could reach deep into Western Europe. source – Yahoo News