Russia’s most senior military officer said Thursday that Moscow would preemptively strike and destroy U.S.-led NATO missile defense sites in Eastern Europe if talks with Washington about the developing... 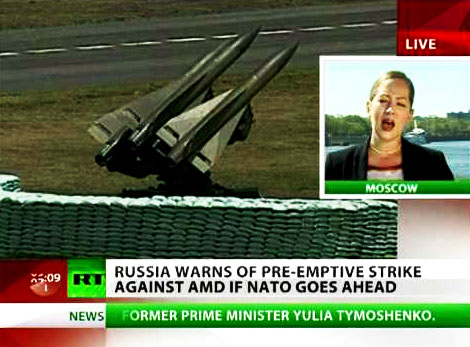 Russia warns it could make a pre-emptive strike against NATO's anti-missile defense shield planned for Europe - if the US persists in going ahead, ignoring the Kremlin's opposition.
by Geoffrey Grider May 3, 2012
NOW THE END BEGINS SHARE:

Russia’s most senior military officer said Thursday that Moscow would preemptively strike and destroy U.S.-led NATO missile defense sites in Eastern Europe if talks with Washington about the developing system continue to stall.

Russia warns it could make a pre-emptive strike against NATO's anti-missile defense shield planned for Europe - if the US persists in going ahead, ignoring the Kremlin's opposition.

“A decision to use destructive force preemptively will be taken if the situation worsens,” Russian Chief of General Staff Nikolai Makarov said at an international missile defense conference in Moscow attended by senior U.S. and NATO officials.

The threat comes as talks about the missile defense system, which the U.S. and its allies insist is aimed at Iranian missiles, appear to have stalled.

“We have not been able to find mutually-acceptable solutions at this point and the situation is practically at a dead end,” Russian Defense Minister Anatoly Serdyukov said.

Ellen Tauscher, the U.S. special envoy for strategic stability and missile defense, insisted the talks about NATO plans for a missile defense system using ground-based interceptor missiles stationed in Poland, Romania and Turkey were not stalemated.

But she acknowledged Wednesday that the recent elections in Russia and the upcoming elections in the U.S. make it “pretty clear that this is a year in which we’re probably not going to achieve any sort of a breakthrough.”

She reiterated that the U.S.-built system, still in development, is being designed to shoot down Iranian intermediate-range missiles aimed at Europe, not Russian intercontinental ballistic missiles (ICBMs).

Russian officials insist that the system has the capability to shoot down their ICBMs, thus robbing their nuclear deterrent of its credibility and destabilizing the Cold War-era balance of mutually assured destruction.

Neither the State Department nor the Pentagon had any immediate comment on the Russian threat Thursday. source – Washington Times